Using injury analysis as the differentiator has us at 23-12 against the spread through seven weeks. Once again this week there are a number of health advantages.

Use the Field View and SIC score to assist in your wagering/DFS/fantasy decisions. The info is free at www.profotooballdoc.com.

SIC Score is our proprietary numerical injury grading system that incorporates the health of every NFL team and individual players to give sports bettors, DFS players and fantasy owners an edge each week during the season. While it purposely doesn’t take into account coaching, schemes or matchups, SIC Scores give an accurate assessment of team/player overall health heading into a game 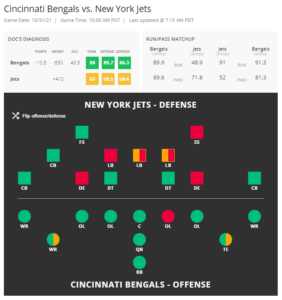 We know this is a big lay on the road and is vulnerable to a back door cover but this game provides the biggest health advantage of the week with a 23 point team SIC score differential. The Jets are still beleaguered defensively, especially against the run. Now the offense is without its starting QB and #1 WR. Meanwhile the Bengals miss just one starter on each side of the ball and Joe Burrow is “green” and healthy for the second week in a row. Last week, his Bengals were +6.5 road underdogs as our favorite play of the day and they cruised to an upset easy win versus the Ravens. This right side seems clear here. 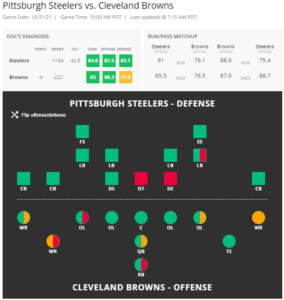 The overall health for both teams are about event but this is a play based on the Browns emerging health. The offense jumped an astounding 45.4 on the SIC score scale, making this the biggest one week change of the season. Baker Mayfield is back as we expected. Nick Chubb will play. Jarvis Landry’s knee issue is minor and not related to the MCL. Odell Beckham, Jr. will be healthier with his grade 3 right shoulder injury and his knee is getting healthier. Cleveland even gets both of its tackles back. This choice is all about the Browns health improvement that may not have been accounted for in the line. 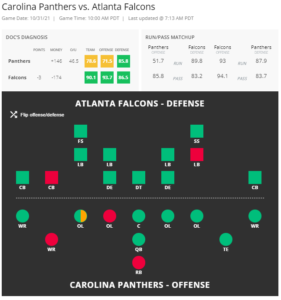 The Falcons offensive is completely healthy and the Panthers still don’t have Christian McCaffrey. Carolina has gone winless in the four contests without their best offensive weapon. There is a double digit SIC score overall difference and that puts Atlanta as the more reliable team.

JACKSONVILLE vs SEATTLE under 44.5 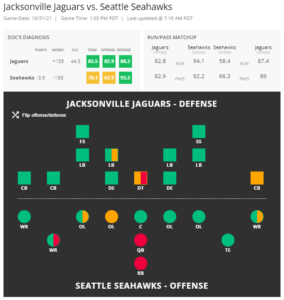 The defenses are on average rank 17.5 higher on the SIC score than the offenses. The Seahawks are without Russell Wilson and Chris Carson. The Jaguars have offensive line issues and have last D.J. Chark their WR1 for the season while they face a completely healthy Seattle defense. When offenses have injuries against a healthy defense, that tends to an under play. 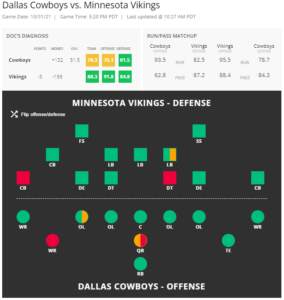 People who got on the Vikings early are likely to have a big middle opportunity. The line started as Dallas -2.5 and now has gone all the way to Minnesota -3. We have felt all along that Dak Prescott would be medically cleared and able to play and this has been confirmed. However, whether he plays is still a big question mark and we discussed my direct experience in the NFL and how these decisions are made. When we started to opine that we felt Dak would not be allowed to play due to a big NFC East lead and potential of aggravation where he might miss multiple weeks, the line was at Vikings -2.5. We will take the current line of -3 at time of writing/publishing but don’t be surprised if the line rises if Cooper Rush is the Cowboys starting QB. Minnesota is the healthier side as we have already factored into the Field View and SIC score that Prescott will be held out. 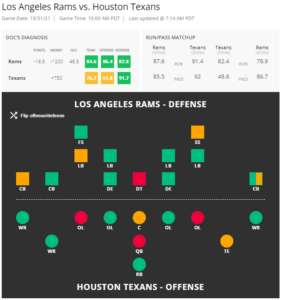 The Rams are healthier but 15.5 is a lot to lay on the road. The numbers are better to go with the under given the double digit SIC score differentials. The Texans still start Davis Mills and have offensive line issues. Meanwhile the Texans are very healthy on defense while the Rams miss two starters. This is an honorable mention and not one of the five picks that will count against our season record. 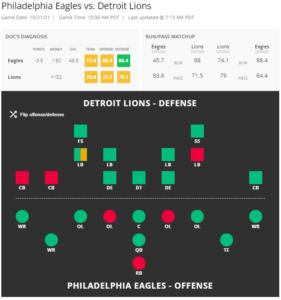 Happy Halloween to all. I hope these picks don’t turn out to be scary. Go to www.profootballdoc.com before making any of your wagering/DFS/fantasy decisions.