The Steelers visit the Browns in an AFC North battle tonight and here is the injury analysis.

To date the five health-based picks against the spread each Sunday AM have resulted in a 7-3 record which is slightly ahead of the two year historical 60% average. Here is the bonus analysis including potential prop plays 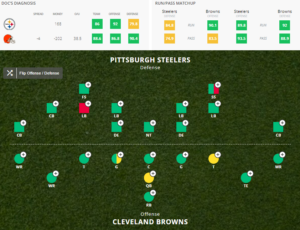 Both Pittsburgh And Cleveland Are 1-1

Star defenders are missing from both squads. No T.J. Watt for the Steelers and no Jadeveon Clowney but the Browns should have Myles Garrett with his neck injury. Both sides have depth secondary issues. This could lead to some points on the board despite the absence of top tier QBs. The run games should be strong with Nick Chubb and Kareem Hunt for Cleveland and Najee Harris coming off recent foot/ankle injury for Pittsburgh.

Diontae Johnson is fully healthy now and with time to throw the ball and coverage issue, Mitch Trubisky should find his #1 target for over 56.5 yards.

Hopefully this starts a great Week 3 of the NFL but the injuries are already piling up with three starting QBs in Dak Prescott, Trey Lance and Justin Herbert injured. The Chargers signal caller is the only one that is poised to play but will need an intercostal rib block injection to do so.

Just another week in the NFL.