President Donald Trump called Big Ten Commissioner Kevin Warren this morning to discuss the return to play of Big Ten athletics. The call, which was described as lasting 15 to 20 minutes, was described as a great and productive conversation which was in no way partisan. In fact, both men, President Trump and Commissioner Warren, stated on the call they agreed that football shouldn’t be partisan in any way and that it was important to get sports back in the Big Ten as soon as it was safely possible.

The call, which was scheduled yesterday at the request of the White House, focused on the necessary steps needed to get Big Ten athletics, particularly football, back on the field sooner rather than later.

Commissioner Warren told the president that he was exhausting every measure possible to play. The president promised to make testing and federal resources available to enable a return to Big Ten play. Commissioner Warren now needs for the Big Ten’s return to competition task force to provide him with a list of resources and thresholds necessary for a return to play, which he will then provide to the White House.

Both President Trump and Commissioner Warren would like to see sports return as soon as possible, potentially even this fall. Ultimately, however, the decision of whether to play fall sports rests with the Big Ten presidents and chancellors, who recently voted 11-3 to suspend all fall sports.

As much as the president and the commissioner may want to play this fall, the presidents and chancellors would have to overturn their decision to make that possible.

As Outkick was writing this story, the President tweeted as follows.

Had a very productive conversation with Kevin Warren, Commissioner of the Big Ten Conference, about immediately starting up Big Ten football. Would be good (great!) for everyone – Players, Fans, Country. On the one yard line!

We will continue to update you on this story. 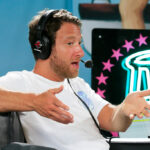