Just who is running the White House? A majority of voters polled by Rasmussen (51%) think someone other than President Joe Biden is pulling the strings inside the White House and it gets worse for Biden. Just 39% of poll participants believe Biden is performing the job of president.

Between COVID and Afghanistan, the 78-year-old finds himself in an absolute mess of a situation, though it’s not any better for his vice president who popped her head out of seclusion with a trip to Singapore. In early August, Harris was looking at approval numbers that had political insiders saying she’s a complete disaster and a liability to Democrats during the midterms.

Rasmussen’s poll of 1,000 likely voters was conducted August 18-19. Biden’s interview with George Stephanopoulos where the president couldn’t keep his days straight was released on August 17.

“I probably talk to him every day, and we can finish each other’s sentences,” Senator Chuck Schumer told the Times. “If there’s a thorny problem, I’ll call him.”

Historic Findings: A majority of U.S. Likely Voters no longer think the President of the United States is mentally and physically capable of doing his job, and suspect the White House is actually being run by others.

The blue checkmark nerds will say that Rasmussen is politically biased against Biden and the Democrats. OK, so let’s see what the blue checkmark mainstream nerds are finding with their own polls. Step on up, NBC News. Let’s take a look at how Independent voters are feeling here. Gee, look at that, the poll numbers are tanking just like in the Rasmussen poll.

Yeah, well, well, well…these polls don’t mean anything…this is all just nonsense. Oh really? The New York Times published an article Sunday that included three bylines and a headline that reads, “As Biden Faces A Political Crisis, His Party Looks On in Alarm.” 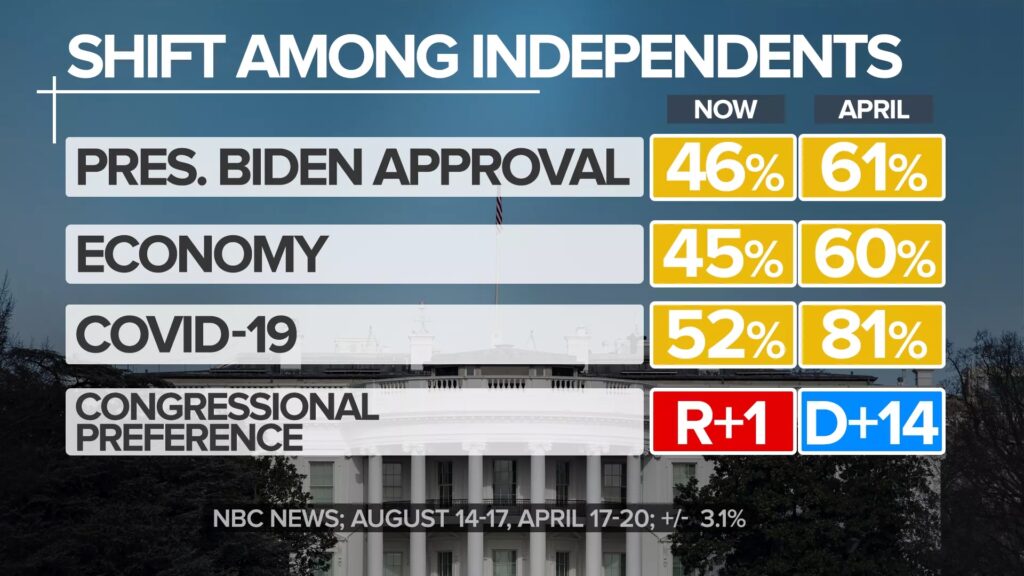 “Interviews with more than 40 Democrats, lawmakers, strategists and party officials show a White House at a pivot point. If the virus continues to worsen or the situation in Afghanistan deteriorates further, many of the president’s allies fear he will lose the confidence of the moderate swing voters who lifted his party to victory in 2020,” the Times wrote.

And with that, Biden enters the final full week of August with chaos in Kabul, the vultures swirling and poll numbers that are in freefall. No pressure, Sleepy Joe. Go get ’em.

Joe Biden’s job approval rating has turned negative for the first time in his presidency. Rough chart. Not sure if it will ever be positive again. pic.twitter.com/dz12VU2f3X