According to a new Gallup poll, the corporate press is so dishonest that only our deceitful members of Congress are considered less trustworthy.

Translation: only brainwashed followers have faith in those lying, hateful media bots.

Only the kooks in Congress are more shameful than the industry that employs Joy Reid. Telling.

By the way, how many of the following institutions have been hijacked by woke losers for financial and political gain? 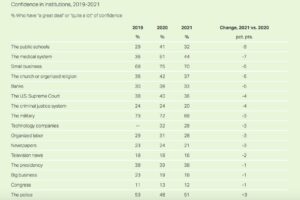 Interestingly, the media is the reason nearly half of poll respondents don’t trust the police. Mainstream media outlets have painted the police as the enemy to convince the American people that Democrat leaders are the solution to dangerous interactions with police. In doing so, these grandstanding frauds have refused to acknowledge statistics that quickly debunk their tired talking points.

Lisa Boothe elaborated on this topic in an interview with OutKick last month:

“Look at the numbers in 2020, data wise, about the shootings: 5.3% of the shootings in 2020 were unarmed, 24 were white, 18 were black. That doesn’t even include people trying to reach for a gun or physically threatening a police officer. The numbers just don’t hold water, yet we continue to be held on hold by these demonstrable lies. It’s insanity to keep believing them.”

What liars they are.

Furthermore, the mainstream media’s partnership with technology companies explains why 29% of voters still trust the big tech industry. That number should be at least 20% lower. Those guys are awful. Social media companies hid the bombshell report about Hunter Biden last fall, which interfered in the 2020 election.

Facebook and Twitter banned us from questioning the origin of COVID-19 as well. Yet, 29% of respondents still trust them?

You also have to love the significant decline in trust for public schools between 2020 to 2021. Between the teacher unions and CRT, public schools are as uninterested in independent thinking as college campuses are and are only slightly more tolerant of opposing views than media companies.

What a depressing chart. We are led and “informed” by the worst type of people.