New Mexico State Police had to escort OutKick personality Tomi Lahren out of the University of New Mexico in Albuquerque Thursday night.  An organized hate group broke into the auditorium to chant “F**k Tomi Lahren” in the room in which she spoke.

As the rioters banged on the door, Lahren, her father, and members of the TPUSA chapter had to barricade themselves in a back room as campus police called for backup.

Consider that the rioters did not appear as a surprise. The organizer, Political Fireball, posted a banner on social media that spread around campus for students to join the “rally.” Yet the university showed little regard for the threat, despite anticipation it’d turn violent.

The group is about what you’d expect, using buzzwords like “white pride.” The leader of the group is likely a longtime racist who embodies the “anti-racist” movement to cover for his past.

Here’s a look at the banner: 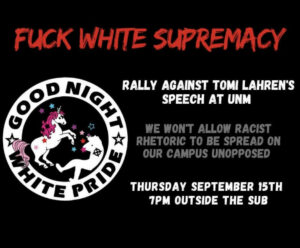 Lahren spoke to me about the incident Friday morning

“We had a couple of campus PD officers. That was it. They did not call Albuquerque police. They didn’t call the New Mexico police. They were completely unprepared and quite frankly, didn’t care.”

“Even after we were in the room, and these protesters that were let into the student union and were banging on the door trying to bust in the door to attack me and the speech goers — the university still did nothing.”

“It took the fire alarm being pulled, and violence happening for the campus PD to call in state police in Albuquerque to respond. But they have to do that on their own because the university did nothing.”

“And this is a big university in New Mexico. I mean, this is a big deal to me that they did nothing. They didn’t seem to care, quite frankly.”

Some of the losers involved posted clips, bragging about forcing Lahren out of the auditorium:

We kicked @TomiLahren out of @UNM campus and it took less than an hour of disruption. It's our duty to shut down white supremacist organizing every chance we get.

What happened at the University of New Mexico in Albuquerque is an example of left-wing extremists using violence to suppress speech and opinions that run afoul of consensus campus rhetoric.

Such groups fear few developments more than a voice coming to campus to offer a perspective that students cannot receive at most indoctrinated universities.

This is the type of free speech intolerance that has proven so damming to an already fractured society.

We are happy to report that Tomi Lahren and her father are safe. But unfortunately, we have little confidence that anyone in authority will hold the thugs accountable who endangered Lahren and the students in attendance.