For at least a decade, the media industry has gone through a multitude of changes preparing for an inevitable takeover of online consumption. Americans flocked to new habits and media as early as 2010, but over the past 12 months, the media industry skipped several chapters and ushered in an official changing of the guard. This transition to digital media, which occurred earlier than expected, still leaves one crucial question unanswered: are podcasts really the future of news/talk programming?

With a 24/7 news cycle, a novel coronavirus pandemic, and at least three $100 million checks to individual media entrepreneurs — Joe Rogan, Dave Portnoy, and Bill Simmons — digital media, at worst, evened the playing field with the duo of linear television and terrestrial radio.

Already, several of the most influential media figures — Joe Rogan, Ben Shapiro, Dave Portnoy, Dan Bongino, and as a show, The Daily Podcast  — reside away from traditional outlets. This isn’t a singular prediction, either. The domino effect is already underway, so Megyn Kelly and Dan Le Batard won’t be the last traditional media talents to move into the digital space in the next few years.

The top online media personalities have anchored their brands with popular podcasts. Podcasting allowed both Rogan and Simmons to cash out for $100 million in 2020. Portnoy isn’t known for a single podcast, but his own $100 million payday was due in part to the value of Barstool’s podcast network. Shapiro and Rogan have the first and second most popular individual political podcast audiences, both of which have a reach that rivals most cable news shows. So podcasting is undoubtedly the most lucrative option for big names. However, for the rest of the industry — especially those who are still expanding their audiences — podcasting poses alarming monetization challenges.

Axios released an eye-opening chart Monday on the staggering growth of the podcast industry as compared to other media. Just as telling, however, was the expected revenue in 2024: 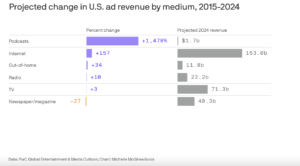 Axios concludes that while “only a few big players make meaningful revenue from podcasts today, … that’s expected to change as the industry matures.” I am less confident, though, that the middle and lower classes of podcasting will ever make real money.

The top 1% of podcasts averages 35,000 downloads per episode. The top 10% drops to 3,000, with a median of just 124. This report comes a week after Citi cut its rating of Spotify’s stock from “neutral” to “sell,” explaining that “the cadence of [Spotify] Premium gross additions (through 3Q20) and app download data (through 4Q20) do not show any material benefit from recent podcast investments (that began in 2019).”

This shouldn’t discourage hosts from trying to launch a podcast. Catching lightning in a bottle is clearly possible with any genre. My concern, however, is that as podcasting continues to take away viewers from TV and listeners from radio, future salaries for all but the top 1 or 2% will drop.

Big companies that are used to churning out stars will find creating podcasting stars and monetizing their shows difficult because podcasting is fundamentally different than TV and radio. Networks like CNN, Fox News, MSNBC can throw anyone on air in a given time slot and introduce him or her to millions of Americans. Like those who listen to their favorite radio affiliate on their drive to work, households often leave the same TV channel on all day. I call this the “background benefit.” There is no background benefit with podcasts. Podcasts don’t just come on, have lead-ins, or follow highly-consumed shows. Listeners have to go out of their way to find a podcast. Thus popular ones have far more engaged audiences than most talk TV programs, but they have fewer casual listeners.

There are also so many podcasts from which to choose that it’s difficult to attract wide audiences. For example, those who want to watch sports talk on TV have only two or three options available and have to put up with whatever topic selection is chosen. With so many podcasts available, sports fans can find shows that discuss the exact subject that interests them at whatever time they prefer. Such listeners do not depend on program schedules or the whims of sports talk show hosts. This quasi-customization creates so many small niches that it prevents podcasts from becoming highly lucrative.

There have also been several positive developments that balance my concerns, however. The appetite for digital media is not limited to just podcasting. The audio RSS Feed of a podcast can be one revenue stream, the video version can be another, and the clips a third, which means a show can make money on the same content in three different ways. Short highlights from shows eliminate a handful of podcasting obstacles, and users on Facebook and Twitter are more likely to click on a 30-second to two-minute clip than a full episode link to Apple Podcasts, which means more viewers. Clips can also be monetized, especially on YouTube, where they are arguably as valuable as the full show video.

Podcasts also don’t have to be the origin of a show. Much like radio and TV shows are often available in podcast form after their airings, digital shows can do the same. The largest area of need is with live streams. Digital media has struggled to compete with TV during breaking news cycles and major events. During the riots at the Capitol, for example, cable news had live updates, while podcasts waited to record the next day. The demand for alternatives was also made clear on Election Night 2020 when Steven Crowder’s live YouTube stream drew over 8.3 million views in 24 hours.

This is where over the top streaming services (OTTs) come in, too. Since the fall, TV stars like Stephen A. Smith and Chuck Todd have launched shows on their network’s respective OTTs, ESPN+ and Peacock. These streaming services have additional revenue opportunities, such as monthly subscription fees, that podcasts do not. A recent report says The Blaze now has 450,000 paid subscribers to BlazeTV, paying on average $102 a year. Under that model, there is a far greater incentive to create shows for new personalities than there is to give them a podcast and hope it gets enough downloads to make money. OTT media shows can also produce clips across all social media platforms for more revenue.

There is a growing interest in podcasting, but few podcasters are actually making money. Some will hold out and hope they, too, can join the limited group that turns a profit. Innovators will instead look ahead and channel the interest in podcasting into other, more lucrative media formats. Overall, the growth of podcasts is encouraging, but it’s just one indication of how media consumption has evolved in recent years. It’s certainly not the final answer.