Thursday, an advisory panel from the Food and Drug Administration is scheduled to vote on whether to recommend Moderna’s coronavirus vaccine for emergency use. With approval expected, Moderna will join Pfizer-BioNTech’s vaccine in the U.S. Together, health officials expect 20 million Americans to receive their first COVID shot before January.

While much attention has been given to the approvals of the vaccines, Americans are now wondering what the differences between the two are.

Overall, the two vaccines have more similarities than differences. Both require two doses, though Pfizer’s are administered three weeks apart, while Moderna’s shots are administered four weeks apart. After the second dose, both have a near 95% efficacy rate. While there is growing evidence of some effectiveness after the first dose, ABC News cautions that those numbers are small.

The effectiveness of Moderna and Pfizer remains true across race, gender, and age.

As with all vaccines, there are potential side effects. With COVID shots, more side effects are experienced after the second dose, ABC News adds. 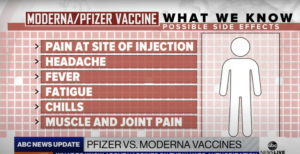 The most notable difference is that Moderna can be stored at a normal freezer temperature of -4, thus won’t have the logistical complications of Pfizer. Pfizer requires a complicated -94 degree temperature to store.

The temperature differences suggest that Pfizer is more likely for use in institutions with large infrastructures, like hospitals. Moderna is better suited for smaller locations.

The two vaccines will not be mixed. Americans will either get two Pfizer shots or two with the Moderna vaccine.

Dr. Todd Ellerin notes that not all distribution details are clear, such as who decides who gets which vaccine. He believes in the initial stage that facilities, like his hospital, won’t choose but instead will be offered a specific vaccine. “Over time, that could change,” Dr. Ellerin adds.

Other questions for both remain, including the health risks of pregnant women who were not studied in the trials. The durability, meaning how long the vaccine will last, is also not clear. Above all, the transmission rates of vaccinated patients is an ongoing study.

U.S. officials say that roughly 75% of the U.S. population must get vaccinated to achieve herd immunity, which could come as soon as the spring.