A youth football coach finds himself in the crosshairs of LeBron James, a majority of Facebook, and all other parts of the social media world after he punched one of the players on his Savannah Gators team. The coach, identified as Anwa Cobb, says in an apology video that he’s “not going to make excuses for what I did.”

“I was wrong,” Cobb said on Facebook. “I shouldn’t have disciplined him in public. I apologize to him, to the kids, to the city. He forgave me and his parents forgave me so nobody else should be bashing me.”

That’s right, Anwa went after someone else’s kid. The apology and the football team’s handling of the matter have sent Facebook parents into a rage. Some even claim they have called the local cops on Cobb.

The Gators Facebook page posted a message seeming to defend the coach, saying he “is a good guy that just took it a little to [sic] far.” The Facebook message, which has since been deleted, read: “Please keep the negative comments off this page please this organization has great coaches we understand what we all saw yesterday was disturbing to us all but let’s not blame everyone for one mans actions.

“The organization is not at Nationals we have only 2 age groups a National 7U & 9U with only those coaches of those age groups witch [sic] the guy in the video is our 9U head coach he is a good guy that just took it a little to [sic] far on a 9U player we understand and we are aware of what’s going on and will like to apologize to the #BigPeachConference.”

LeBron, a father of three, has gotten into the mix on this topic. That’s bad news for Cobb. You know things are bad when forces that normally battle each other on social media have joined forces against Cobb.

“Ain’t no way!! Couldn’t be my kid. Hell if I there and it’s not even my kid we gone have more than words for sure,” LeBron wrote on Instagram.

This isn’t the first time Anwa has found himself in some trouble. Two years ago, his wife, Alexis, wasn’t too happy with this low-down, dirty dog. 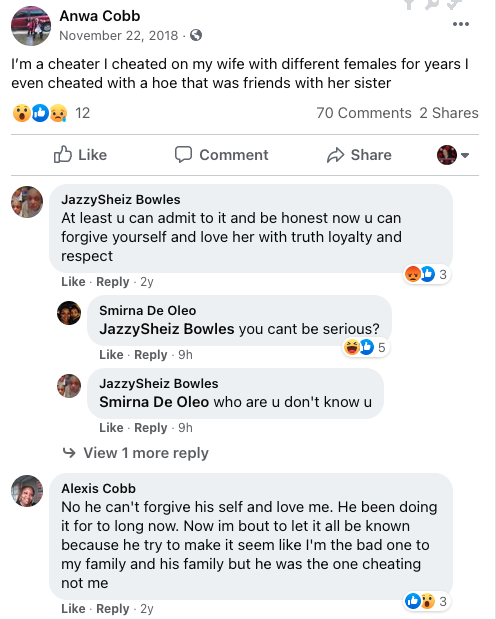