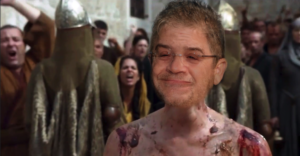 Comedian Patton Oswalt is sorry too.

Though Oswalt didn’t know it at the time, the thought police no longer allow him to hang out with Dave Chappelle, his friend of over 30 years. Oswalt learned this after he ran into Chappelle on New Year’s Eve and posted a picture with him on Instagram. The mob then shamed Oswalt as a transphobe because last fall Chappelle hosted The Closer, a Netflix special that critics called anti-LGBTQ.

Oswalt learned only this week that gallivanting with Chappelle makes him a transphobe by association, so now he’s asking for forgiveness.

“[We] 100% disagree about transgender rights & representation. I support trans peoples’ rights — ANYONE’S rights — to live safely in the world as their fullest selves,” Oswalt wrote. “For all the things he’s helped ME evolve on, I’ll always disagree with where he stands NOW on transgender issues.

“I’m sorry, truly sorry, that I didn’t consider the hurt this would cause. Or the DEPTH of that hurt,” he added.

Apologizing in caps once meant something — that a person actually regretted his actions. But an apology to the woke mob is not an apology. It’s a surrender.

Oswalt isn’t sorry he posted a picture with his friend. He’s scared. Oswalt saw how the progressive blue checks attacked Chappelle in October and realizes he doesn’t have the backbone to survive hit pieces and calls to exile him from cushy Hollywood gatherings. So he offered an “apology” to get out ahead of it. Rather than conveying regret, Oswalt is begging the elites: Don’t hurt me. I will obey. Please, give me another chance.

But of course, as it always does, the mob accepts only his future overtures of atonement, not his apology. So just like that, Oswalt joined a long list of actors and comedians whom the radical left now controls.

Oswalt’s “apology” epitomizes the overrepresentation of one side of the cultural divide on social media. Studies showed in 2021 that less than 10% of the electorate agree with an overly sensitive culture known as “woke.” Yet it often feels like only 10% oppose it — that those who choose not to include gender pronouns in their bio are the true outliers.

But see, that’s what’s misleading. Progressives don’t control the mass population. It seems that way because they’ve weaponized influencers and controlled the messaging. The faction to which Oswalt apologized has over-indexed the popularity of their movement by emasculating celebrities, athletes, and television hosts. They may not be popular in terms of raw numbers, but they do often have the fame and fortune that so many either want or want to keep.

Money and fame make people weaker because they give them more to lose. And most elites would rather sacrifice their beliefs than their status. So they apologize, get in line, and preach the message — just as they are told. They may be cowards, but they also remain wealthy, protected, and supported on social media. To them, that’s a fair tradeoff.

The radical left has capitalized on a fragile group that the rest of the country idolizes. This process is brilliant but wicked. If someone like Oswalt is willing to throw his long-time friend Dave Chappelle — whom he knows is far from transphobic — under the bus, it’s hard to tell how far this movement could go. Because however far that is, that’s how far it will go.

Adam Carolla discusses this very phenomenon in his book, I’m Your Emotional Support Animal. Carolla explains that the term “progressive movement” means continuous. So even when the warriors run out of real problems to solve, they will keep searching for new ones. And they will find another cause — no matter how far of a stretch it is — so that they can keep “progress moving.” They begin with a single person, then expand and attack that person’s entire orbit.

We’ve reached this point in comedy. Last fall, activists demanded Dave Chappelle crumble for practicing comedy on stage. Now, months later, the same group has set its sights on others — in this case, Oswalt — within Chappelle’s circle.

Obviously, this dynamic is ominous. Not only are people attempting to destroy the lives of their fellow Americans without the slightest compunction, but the people with the means and resources to fight back against these bullies so quickly fall in line and obey. This cowardice is tearing us apart.

Is there a solution? What happens if people begin to say no — if people only apologize for actual mistakes and to those they’ve harmed, not the media consensus?

The answer to these questions is encouraging, and we may look no further than the Oswalt/Chappelle incident for proof. Remember, the same group that came after Oswalt had come for Chappelle in October, only Chappelle didn’t comply or apologize. And unlike Oswalt, Chappelle won.

Cancel culture happens only as long as the targets cooperate. The winning move is not to play, as Chappelle has demonstrated. After Chappelle refused to retract his commentary, the vultures moved on to their next target. They were out of ammunition.

Dave Chappelle is one of the rare cancel culture survivors. Meanwhile, Patton Oswalt is a useful casualty. You decide which group to join.