Every year around this time Madden ratings come out which means NFL players, looking for any motivational edge, are invariably displeased with said Madden ratings. For quarterback ratings, Patrick Mahomes is a 99 and Josh Allen a 77 overall. HOWEVER, Allen is a 99 in QB throw power and Mahomes is “only” a 97.

“Dude, obviously Josh has an extremely strong arm, but I’ve yet to see someone have a stronger arm than me,” Mahomes said on a SportsCenter special, as transcribed by Syracuse.com. “Maybe we can line up… I know we talked about maybe having a throw-off and then we can prove who really has the strongest arm … I have the ultimate belief in myself. I mean he does have a strong arm, but if I put it out there like 80-85 yards… If he beats that he beats it.”

If this all sounds familiar, it’s because similar challenges were levied last year. Last February, it was Allen who challenged Mahomes to a distance throwing contest, on an episode of Pardon My Take. In April, Mahomes said he’d love to stage the contest for charity.

Even as MLB, NBA, and NHL are all on the cusp of returning, we’re starved for competition over here. Surely there must be a way to make Patrick Mahomes vs. Josh Allen happen. 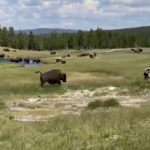 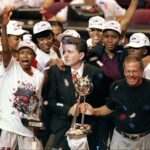