Remember the Pac-12 Conference? The old days when sports fans enjoyed West Coast football? Ahh, those were the days, grandpa. “People can’t watch us on our own networks,’’ a source told The Mercury News this week about the Pac-12 Network as the data starts to come in. It paints a bleak future for a sports network that was supposed to bring the conference in line with the likes of the Big Ten and SEC.

It doesn’t take a genius to figure out that the Pac-12 has disappeared from the national landscape. Things are so bad out west that, according to The Mercury News, it’s possible the entire Pac-12 Network could be shut down.

Why? The subscriber numbers just aren’t there. The latest data shows that the network has lost 17% of its subscribers over the past two years and is down to just 14.8 million total subscribers across the seven networks that make up the Pac-12 Network: Pac-12 L.A., Bay Area, Washington, Mountain, Arizona, Oregon and National.

As of 2019, the Pac-12 reported $123 million in revenue with $90 million in expenses. Schools received about $2.8 million, which is much lower than the estimates Larry Scott projected for the schools back in 2012 when he said $5 million to $7 million per school would be a middle-of-the-road revenue year. Through 2019, the conference had yet to send $3 million to schools in a single year. 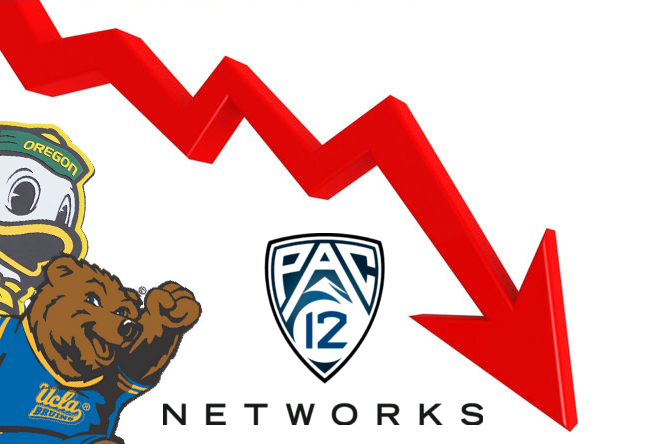 What’s it all mean? It’s bleak out there for the Pac-12 in the war for TV dollars.

The Big Ten and SEC battle it out to Hoover vac the remaining ESPN & Fox dollars, and all involved wait for the big tech companies to jump in and get a taste of the college sports content game.

Pac-12 whipping boy Larry Scott was sent packing in January, and deservedly so. That’s one positive step in the right direction, but now whomever the school presidents hire to replace Scott will have an incredible task in front of him/her: How do you get a new TV deal with new revenue dollars when there’s little interest in the product the Pac-12 is putting on the field?

The Pac-12 knows it has to do something drastic fast. It will likely shutter the conference network, rebuild their brand and hope a national audience will once again care about sports west of the Rocky Mountains.