It certainly is a Wonderful Life being able to wake up in the home of the brave, land of the free. But amongst OutKick’s Top Ten Christmas flicks, you won’t hear any bells ringing or find any angels getting their wings.

What you will find during that last day or two of pretending to work is a movie list that is hooter, HOTTER than any other Christmas list you’ll come across. Besides, who wouldn’t want to scroll through a top ten list while the out of shape, undersexed HR rep bounces from cubicle to cubicle to show off her dumb Christmas sweater with blinking lights that unintentionally draws your tired eyes to her saggy boobs?

“If I woke up tomorrow morning with my head sewn to the carpet, I wouldn't be more surprised than I am right now.” – Clark Griswold, 1989 pic.twitter.com/wQXBXrFKSx

Without further ado, I present to you the definitive OutKick Christmas Movie Top Ten.  Feel free to nip away at the choices in the comment section below. What did I say, nipple?

Will Ferrell and Mark Wahlberg co-star in this hidden gem that features one of best dad jokes of the 2010s: Q: “Why does a duck have feathers?” A: “To cover up his butt quack.”

Admit it dads, you laughed. Even if you did roll your eyes.

9) Jingle All The Way

Enough with the PG stuff (for now). Mila Kunis is all dolled up, Kathryn Hahn’s ready and willing to get plowed and there’s enough alcohol and sex throughout to make Joe Namath cannonball off the wagon.

Who hasn’t wanted to devise a plan to avoid visiting with extended family over the holidays? Also, Jon Favreau has an all-time movie name in this one: Denver McVie.

6) How The Grinch Stole Christmas

Ace Ventura walking away from a storied career as a Pet Detective to spoil Christmas, all in a restless kid-friendly amount of time (105 minutes). 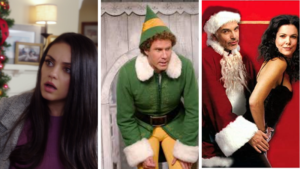 Adults and kids alike can’t help but scramble for a pack of Fruit Stripe gum and 10 minutes alone with a Talkboy after watching Kevin stymie the Sticky Bandits for a second consecutive Christmas.

A Will Ferrell-led movie appears for the second time. Witness a life-sized elf tell Artie Lange he smells like “beef and cheese.” There’s also an unusual shower scene featuring Zooey Deschanel which leads to numerous questions surrounding mall showers, why they exist and who would dare use one.

The movie that made 8-year-olds across the country dream of the chance to halt a home invasion. Simultaneously responsible for countless pizza delivery folks being told to get their no-good keister off the property and the avoidance of Pepsi chasers at sleepovers.

The movie that keeps on giving, the whole year. “Shitter’s full.” “You Serious Clark?” “Bend over and I’ll show ya.” “Hallelujah! Holy sh*t! Where’s the Tylenol?” Simply put, the most quotable and re-watchable Christmas movie of all-time. The reason green dickie turtlenecks and white loafers are so popular around Christmas time. Also, the leading factor in the Jelly of the Month Club’s annual December sales spike.

Now go back to that phony desktop spread sheet and waste another hour or two pretending to work, ya filthy animal.