Only 28% of Americans want President Joe Biden to run for reelection in 2024, a new poll from The Associated Press-NORC Center for Public Affairs Research found.

Even more concerning for Joe and company: just 48% of Democrats want him to run for president again.

Biden is coming off perhaps his worst week in office, although the horrific Afghanistan withdrawal is a close second. Both his spending and voting bills are a congressional dead end, and the Supreme Court ruled against his administration’s vaccine-or-test mandate aimed at large businesses. Meanwhile, inflation remains at its highest level in decades.

Biden is losing support from voters as well as the media, his most crucial ally. On Sunday’s Meet the Press, NBC’s Chuck Todd opened the show with a scathing monologue on Biden’s presidency. If NBC News had ever gone in on a Democratic president harder, no one can remember when.

While this change is eye-opening, it is unclear what it means, if anything. Voters may not want Biden to run for reelection. In fact, 56% of Americans disapprove of Biden’s performance, while just 43% approve. Yet Democrats have nowhere to turn. A bench with Kamala Harris, Pete Buttigieg and Elizabeth Warren is basically no bench at all.

Interestingly, Biden does not seem concerned. At least he wasn’t during a rambling presser on Wednesday. “I don’t believe the polls,” Biden said.

He doesn’t believe them. Got it. But did he trust them early last year? Because at one point, voters didn’t think Biden would become the worst president in our lifetime. 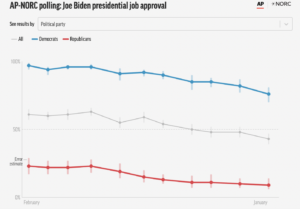 On the other side, a recent GOP poll found that former President Donald Trump holds a commanding lead over other potential Republican candidates in the 2024 presidential election.

I still think Biden runs in 2024. So Trump-Biden 2.0 could be forthcoming.