Omaha, NE- Fans in Omaha couldn’t have asked for a better day for baseball, with Arkansas and Ole Miss battling for a spot on the National Championship series. But for the Razorback offense, it was hard to get any momentum off Dylan DeLucia, who led the Rebels to the 2-0 win and opportunity to play for a title.

Ole Miss will play in the College World Series finals for the first time in program history. So much for firing Mike Bianco about a month ago. Ole Miss could also bring the State of Mississippi consecutive baseball titles, after the Bulldogs won it all last season.

It was a pitchers duel between Connor Noland and Dylan DeLucia through the 3.2 innings, but the Rebels finally got on the board in the 4th, leading 1-0. Kevin Graham had an RBI Single in the 4th, bringing home the first Ole Miss run. In front of a fired of Arkansas crowd, the Rebels kept causing problems on the mound and defensively, giving DeLucia the opportunity to go eight innings. It was Calvin Harris that gave Ole Miss a bit more wiggle room, with the seventh inning RBI. It had become very apparent that Dylan was in the zone, not walking a batter during his entire appearance 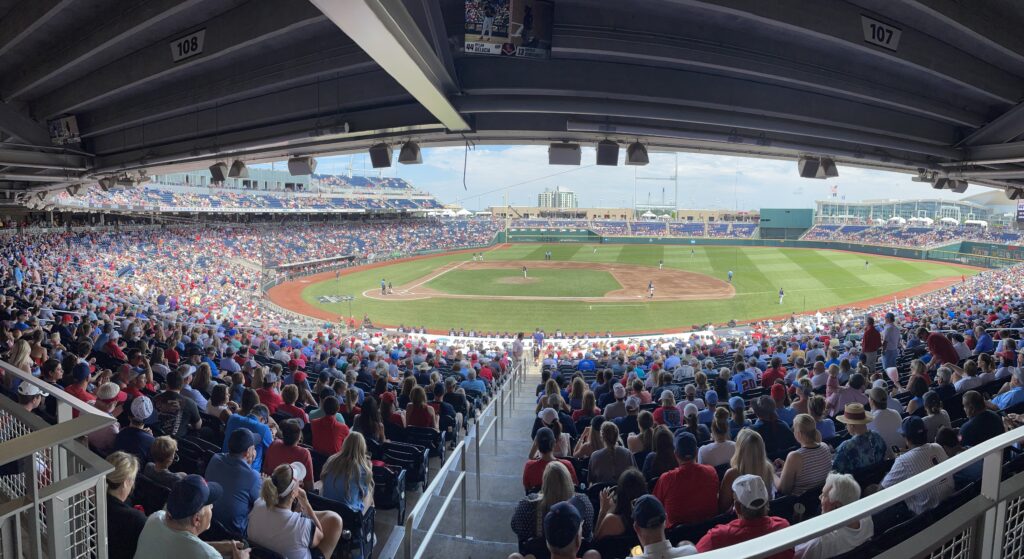 This was the type of game that folks in Omaha hoped to see over the previous eight day of the tournament, close games that come down to the final few innings. Well, Arkansas and Ole Miss delivered over the course of 24 hours. Credit Arkansas pitcher Connor Noland for his strong outing, coming off three days rest, throwing eight innings and putting up seven strikeouts, with seven hits.

After all of the back and forth between these pitchers, it came down to the final inning, with Dylan DeLucia telling his team ‘I got this’ as he finished off the Razorbacks. It was a performance of a lifetime, only giving up four hits, zero walks and seven strikeouts. He had just pitched last Saturday and went a full nine innings on Thursday. Asked postgame what the game plan was for Arkansas, it was all about his teammates.

“Attack the zone, these teammates had unbelievable plays today. I knew I was gonna have to be on my best today.

There was a bit of questioning as to whether Dylan DeLucia would finish off the game in the ninth inning, but when discussing it postgame, he referenced the zeros he saw on the scoreboard.

“I just stayed with it. I didn’t even — I just looked up and saw all those zeros going into the eighth, and I was just like it’s my time to finally finish this game.”

Asked after the game what he was proud of the most with this Ole Miss team, Mike Bianco pointed to the toughness of this group, especially coming off the lost on Wednesday night.

“Yesterday was tough. When I sat up here — you might have asked the question, I wasn’t sure at the time, because you could see they were pretty down last night when we went out to left field. That’s to be expected because it was bases loaded. I’m sure the players and the Ole Miss faithful in the stands and all the fans that we’ve had here were thinking some ball’s going to squeak through an infielder hole and we were going to win a game, and we didn’t.

“So to be able to bounce back and play like this today, another tough one,” Bianco added. “And that was one of the challenges we said this morning, that nobody said it was going to be easy.”

This team went through a tough stretch in April, especially coming off the series sweep by Tennessee. Bianco pointed towards those times as a reason to why his team was able to bounce back today.

“Maybe some of that April toughened us, weathered us a little bit to be able to handle last night and be able to bounce back today.”

Ole Miss fans were nervously waiting to see if this team could finish off the impressive run in Omaha, getting them to a National Championship series. After the loss on Wednesday night, fans hit up the local watering hole to calm the nerves, which there were plenty of. It was only after the Rebels took the 2-0 lead that they could actually breathe, knowing anything could happen. A crowd filled with what looked like 60% Razorbacks fans, the fans yelling ‘Hotty Toddy’ were rewarded for their presence.

“The story of the day was Dylan, who had a legendary performance.” 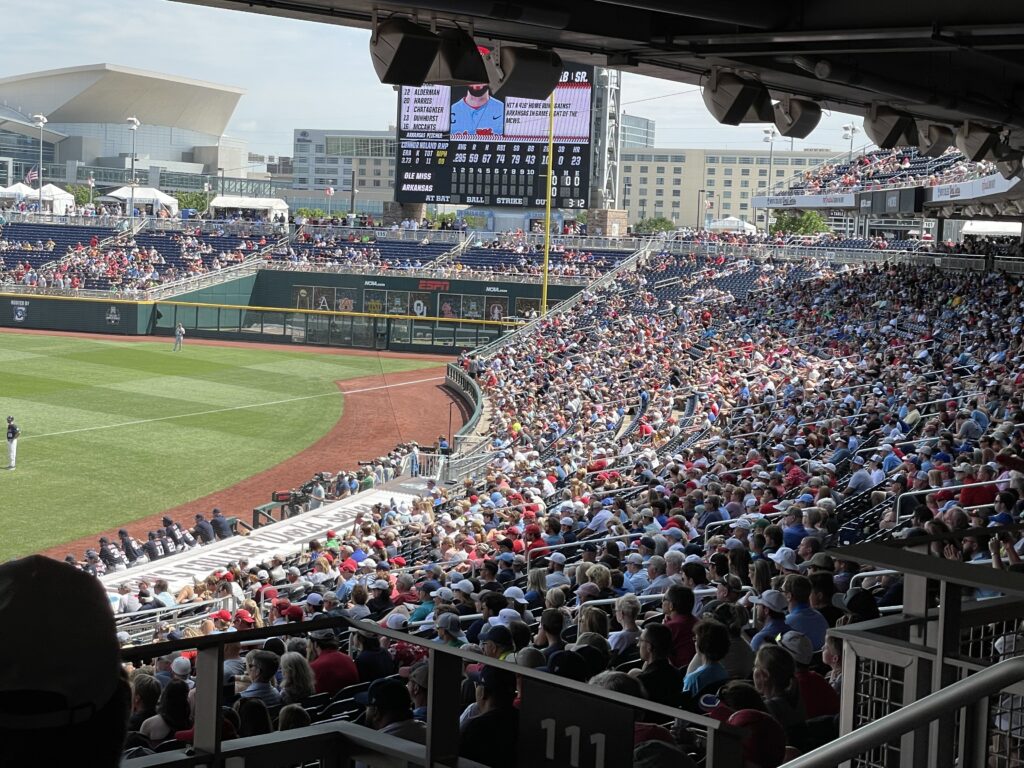 So now we get the matchup between two teams that are really feeling themselves at the moment, both playing really good baseball. Oklahoma had the luxury of an extra day off, not having to play today, while the Rebels were forced into an extra game of work. But the Rebels not having to use their bullpen should go a long ways for the National Championship series that will begin on Saturday night.

We had one final SEC game on Thursday afternoon and we now look towards the future on Saturday. It will be Ole Miss and Oklahoma playing for the title.

I hope the City of Omaha is ready, because I can already hear the cars being started in Oxford and all over Oklahoma. We’re about to witness a fun matchup this weekend.