The Oklahoma Sooners are the 2022 NCAA Division 1 National Champions in the sport of softball.

OU won the Women’s College World Series on Thursday, finishing off arch-rival Texas in two games in the best-of-three WCWS Championship Series. After winning Game 1 of the championship series in a 16-1 victory on Wednesday night, the Sooners posted a 10-2 victory in Thursday’s Game 2 to secure the title.

The consensus No. 1 team in the nation from the first day of the season, the Sooners lost just three times in 2022, finishing with a 59-3 overall record.

In a 62-game season, the Sooners recorded forty wins via the run-rule. There is no run-rule in the WCWS Championship Series or that number would be 42; both of the games that secured the Sooners’ latest title would have qualified under the run-rule, had it been in place.

Superlatives aren’t necessary for an Oklahoma team that made plenty of news between the white lines. The all-time home run record in collegiate diamond sports – not just softball – belongs to Jocelyn Alo, the cornerstone of this Sooner team. 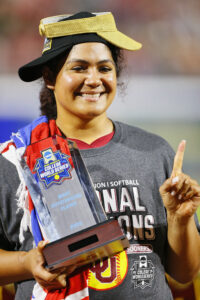 Thursday night’s clincher began with the Sooners in a 2-0 hole after a pair of first-inning runs by Texas. Center fielder Jayda Coleman robbed a would-be 3-run home run off the bat of Courtney Day in the first that ended the early Longhorn rally. 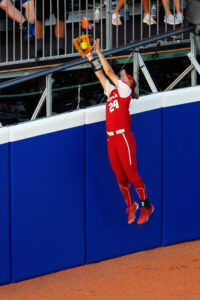 Though it took them until the fourth inning to put runs on the board, once the Sooners’ offense clicked, it clicked often. Two runs in the fourth, four runs in the fifth, and four runs in the sixth opened a 10-2 lead for OU; the offensive onslaught included home runs by Kinzie Hansen and Grace Lyons.

Freshman sensation Jordy Bahl got the start in the pitching circle, later giving way to Nicole May, then to senior Hope Trautwein. Bahl earned the win, her first of the postseason, and moved to 22-1 on her rookie year.

Justin McLeod has covered college softball for eleven years and is the National College Softball Editor for Extra Inning Softball. His year-round work can be found at www.extrainningsoftball.com.