The Women’s College World Series will kick off on Thursday, June 2nd in
Oklahoma City. Eight Division 1 college softball teams will vie for the
national championship on the game of softball’s biggest stage. 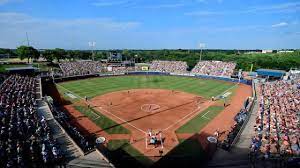 Oklahoma, the #1 team in the nation from day one of the regular season and
the top-ranked team in the NCAA tournament, headlines the championship
tournament.  #5 UCLA, #7 Oklahoma State, #9
Northwestern, #14 Florida, Texas, Arizona, and Oregon State join the Sooners in OKC.

For the first time, the WCWS will operate under an expanded schedule this year.
Thursday’s schedule includes opening-round games featuring all eight teams in
the field. The first elimination games of the double-elimination tournament
will take place on Friday night. The remainder of the preliminary rounds will
take place over the weekend, culminating with the tournament’s semifinals on
Monday.

Weather is always a factor at this tournament.  Assuming the Semi’s wrap up on Monday, the best-of-three national championship series will begin on Wednesday.

Defending national champions Oklahoma enter the WCWS as the odds-on
favorites, though their road may not be as easy as originally thought. Sporting
a 54-2 overall record this season, the Sooners have combined quality pitching
with a sensational offense lineup that doesn’t give opposing pitchers a day
off.

Alongside them in the WCWS field, though, are both teams that the Sooners
lost to through the course of this year – namely Texas, who handed OU their
only defeat of the regular season, and Oklahoma State, who bested their archrivals
in the Big 12 tournament championship game.

On Tuesday night, Oklahoma pitcher Jordy Bahl was named the NFCA/Schutt
Sports National Freshman of the Year, while Sooners slugger Jocelyn Alo was
named the USA Softball Collegiate Player of the Year. 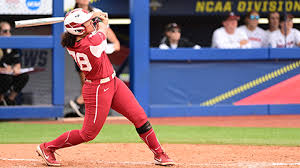 Along with OU, both UCLA and Oklahoma State made it through their respective
regionals and super regionals unscathed. Both teams have been top-10 programs
for much of the season and earned the right to host both regionals and super
regionals by virtue of their top-8 national seedings.

9th-ranked Northwestern was flawless in their home regional,
including putting double-digit runs on McNeese in back-to-back games to move on
to the Super Regionals. The Wildcats had to travel to Tempe, Arizona for the
Super Regional round, where they came from behind in each game of the
best-of-three series and ultimately took down Arizona State to qualify for the
WCWS.

14th-ranked Florida had a similar path – after sweeping through
their home regional, the Gators went on the road to Virginia Tech in the
super regional round. After dropping game one, the Gators came storming back and
took the final two games of the series to reach the WCWS. The Gators are the
only multiple-time WCWS champion from the SEC, having won the title in both
2014 and ’15.

Both Arizona and Oregon State played in regionals that featured two unseeded
teams facing off; that had only been done twice in history and it was done
twice this year.

The Women’s College World Series kicks off on ESPN at 12 pm Eastern on Thursday,
when UCLA and Texas will face off.

Justin McLeod has covered college softball for eleven years and is the National College Softball Editor for Extra Inning Softball. His year-round work can be found at www.extrainningsoftball.com.