Instead of reacting to news from Adam Schefter, Ian Rapoport, or some pretend insider who somehow got a blue check — Julio Jones has us talking about the news he broke himself.

Jones literally said on FS1 Monday that he is “out of” Atlanta. Since the bombshell, the odds for which team will land Jones have shifted considerably.

Keep in mind, Jones says he wants to win. He’s not going to the Lions.

Here are the odds available at FanDuel’s Colorado book: 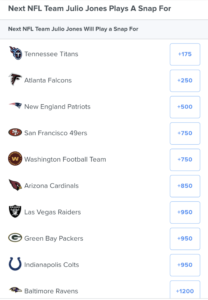 Titans fans were in a rather good mood Sunday when a video surfaced of Derrick Henry working out with Julio Jones. Ranking No. 1 in these odds likely has Tennessee fans betting not only on Jones’ next team but the 2021 AFC champion. I mean, hey, positivity always wins.

Each team listed would be enhanced with the addition of Julio Jones. He’s a monster. But none would be enhanced as much as the Ravens. Coupling Jones with Sammy Watkins fills the only hole Baltimore had left. (Lamar Jackson’s accuracy is not a hole, it’s a curse.) The Ravens have one of the smartest front offices in sports, so I’m intrigued by +1200.

I have a message for the Packers:

You have wasted Aaron Rodgers’ career for a decade. If there’s even a 5% chance he wants to return, it will be erased if you guys don’t at least make an effort to get him Julio Jones.

Place your bets now at FanDuel.