Nick Saban is almost universally regarded as the top coach in college football. His admirers range from rich and poor, young and old and cover all ends of the earth…or at least the United States.

You get the point.

Despite the amount of success Saban’s attained, he isn’t above gawking at some other big names across the world of sports. In fact, the 5’6″ Saban tends to fawn over NBA giants — especially two of the all-time greats.

“I admire Kobe Bryant. I admire Michael Jordan — guys who were dominant for a long, long time,” Saban told AL.com. 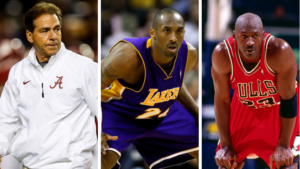 It shouldn’t come as much of a shock that Bama’s boss has admiration for MJ and the Black Mamba. All three are synonymous with competitiveness and championship pedigree. Saban has 7 championships, Jordan six and Bryant 5.

“They did it on a very consistent basis because some people can be dominant for a little while, but it takes a special someone because it’s not really human nature to try to be the best you can be, Saban said of Kobe and MJ. “It’s human nature to survive.”

On different occasions, and at the request of Saban, both Jordan and Kobe previously spoke with the Alabama football team.

“The day Kobe came and spent time with our team and Michael Jordan spoke to our team…A lot of successful people have come and tried to impact and give our players leadership and direction and how they can sustain their performance,” remembered Saban, per AL.com.