Aside from the collection of Rolls Royces, dinosaur skulls and the marriage to Elvis’ daughter, Nicholas Cage isn’t all that different from you and I. Turns out, the actor just wants to enjoy a little KFC and some champagne.  “I was 9 years old, and my father brought home a bucket of Colonel Sanders original recipe and a bottle of champagne,” Cage told Yahoo Entertainment. “The combination of this Americanized tempura chicken and champagne was absolutely unforgettable. I don’t know if I’d recommend doing that with anyone’s 9-year-old, but it was fun at the time!” 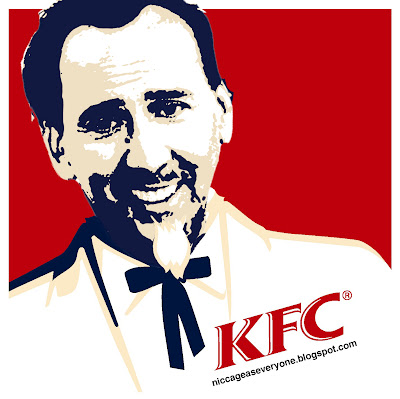 As Cage tells it, there’s nothing better than engaging in a little chicken and bubbly once his work is finished: “Whenever I make a movie, it’s my wrap present to myself. At the end of the movie I’ll go and get a bucket of original recipe and that’s how I celebrate.” Cage told Yahoo.

I’ve been present when legs and breasts were surrounded by champagne, but those were much different circumstances.

So the guy likes some KFC and Satan’s sparkles, can you blame em? Have you ever enjoyed the extra crispy? Personally, I’ve never mixed the delicacy with a flute of Moet, but I’m not against trying.

Cage is currently on the promo circuit for his new movie – “Pig”, which opened Friday in theaters nationwide.