Dorn was shot and killed June 2 while responding to a burglar call at his friend’s pawn shop. Dorn retired from the St. Louis police force in 2007 after serving for 38 years, going from patrol officer to captain.

“Per a source with knowledge of the situation, players may display the names of victims of police violence and/or systemic racism on the padding along the bottom of the backs of their helmets,” Mike Florio reported in late August.

With a week to go before the start of the NFL season, it’s still unclear who will be in charge of the list of names approved for the helmet padding or if players will just modify the helmets as they see fit.

Eifert, who is in his first year with the Jags after a seven-year run with the Cincinnati Bengals, joins NHL player Pat Maroon in honoring fallen officers. This week, Maroon taped his stick in honor of Tamaris Bohannon, another St. Louis police officer who was shot and killed Saturday during a standoff with a gunman.

Got some help from officer Tamarris Bohannon last night. R.I.P to a true hero. Prayers to your beautiful wife and 3 children 🙏❤️ pic.twitter.com/Bv5LoAKCqK 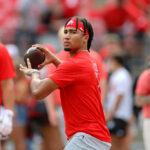