You’re damn right Peter King wasn’t going to miss Super Bowl LV, even after months and months of railing on COVID, Ron DeSantis’ job performance and those who would dare live their lives as the boogeyman cometh around grocery stores across this country. There was Peter Sunday night at Raymond James Stadium, sucking down the sweet pigskin nectar squeezed by Roger Goodell and his lieutenants who keep churning out this drug that we cannot possibly get enough of.

Now that I have that lead out of the way, let’s cut to the chase here. There were a bunch of blue checkmark sports journalist nerds who spent the past 7-8 months rooting against the Shield. They said life couldn’t go on due to COVID. They said the world would end if Roger and his crew held a football season. They predicted death. They predicted financial ruin. They said alcohol couldn’t be served because fans would have to take too many leaks. Seriously, Peter wrote that. He hypothesized that not serving alcohol at games would lead to fewer restroom trips, which would mean fewer chances to spread the ‘VID.

KANSAS CITY-Socially distant football coverage, 2020. We all have our own little boxes to watch the champs work. pic.twitter.com/RUB0p9eJbE

Guys, I’m not making this up. The headlines are in stone. Peter’s words are in stone. We had New York politicians predicting carnage if Bills fans were allowed inside Ralph Wilson. Then it turned out that when they started testing Bills fans DURING THE HEIGHT OF COVID AROUND THE WORLD, the Mafia returned a positivity rate of just 1.9%. The World Health Organization recommends a positivity rate under 5% for governments to consider reopening their cities.

Suddenly the light switch went off in Gov. Cuomo’s head that he’d murdered the state’s economy and he was sitting on a 1.9% positivity rate amongst these maniac Bills fans who’d been partying amongst each other in secret locations for months to avoid the New York State ‘VID police.

“We will not have sporting events with fans until we have a vaccine,” Zach Binney, a PhD in epidemiology told Sports Illustrated in April. “The idea of a quarantined sports league that can still go on sounds really good in theory. But it’s a lot harder to pull off in practice than most people appreciate.”

Binney never slowed his energy all the way through the Super Bowl. Zach spent the last few weeks blasting the NFL for not telling fans to cancel their party plans.

If you look at the numbers, I really do think they did a phenomenal job protecting their players and staff.

But they never showed any indication they cared about any broader community impact at all. They were in their own world, with no interest in being part of ours.

It’s 100% important to look back at what the Sports Illustrateds, the Scheftys, the Olbermanns and the Kings of the world said about the NFL operating in 2020. We understand you don’t care what these people and outlets say. We get that you’ve tuned them out.

However, it’s important for those who might not be as enlightened as you are to see the light. There are people out there who don’t understand one of the most important NFL writers of the last 30-plus years hypothesized that alcohol sales couldn’t happen at NFL stadiums because fans would have to take too many leaks.

Let’s take a look back and #neverforget: 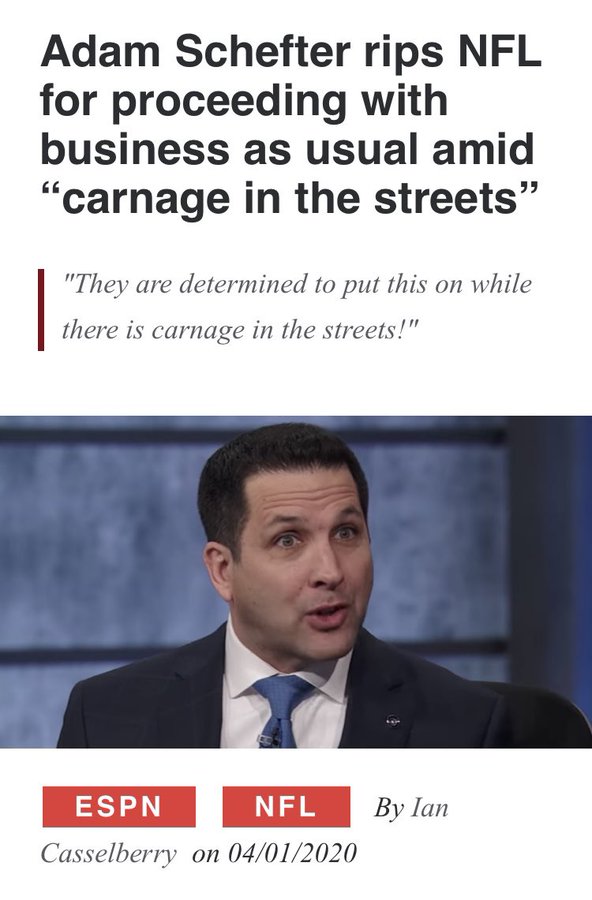