There are NIL deals and then there’s the NIL deal signed by Nebraska freshman wide receiver Decoldest Crawford, who will soon star in radio and TV commercials for Omaha-based HVAC company SOS Heating and Cooling.

It’s a match made in NIL heaven. It’s a dream scenario for all involved.

“We didn’t expect to be in a situation like this but the second we saw that Decoldest was signing with Nebraska the light bulb went off immediately,” Jake Wasikowski of SOS told OutKick. “We said we have to get this guy to be the spokesperson for us and so far it’s going really well.”

Crawford, a six-foot, 180-pound receiver out of Shreveport, Louisiana, will forever be known as the first NIL deal signed by SOS. This is business 101 for each side. Capitalism at its finest.

According to Wasikowski, the process of signing Decoldest as the spokesperson for the coldest AC in Nebraska wasn’t too difficult. The SOS team reached out to an agency handling Nebraska NIL deals, a meeting was set up, details were hammered out and they got it all done before Huskers camp started.

Yes, there’s a non-compete in Omaha. Some other HVAC company can’t come in and sign Decoldest and set off Cold War II.

Now it’s up to both sides to dig in and make some money.

“He has a really unique name and we want to capitalize on it with him and hopefully he grows into that role of doing really well on the field. We’re willing to take a chance on him,” Wasikowski added.

The numbers so far tell the story. A simple tweet announcing this incredible business partnership is going nuts and SOS is a hero to the NIL world. 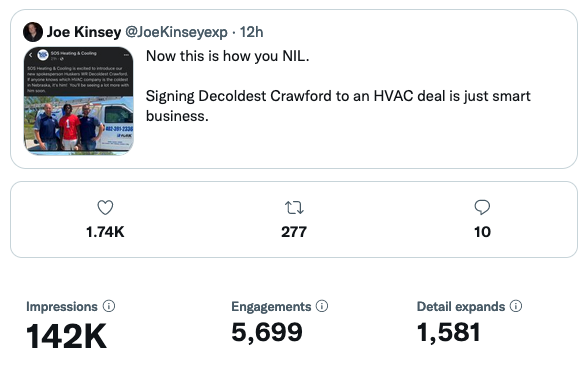