I had expected Biden’s allies — the media — to ignore the story. Instead, one press member is acknowledging Biden’s nap and working fiercely to defend the snooze.

NBC News senior White House reporter Kelly O’Donnell warned us to take it easy on Biden because these sessions “can be a political obstacle.”

“It is also true that the hours are long, the time differences are real and the president has kept a rigorous schedule over several days, having lots of meetings, appearances, and speeches,” she added on MSNBC Monday. “And, quite late night last night.”

Got that? Give Biden a break, he works long hours and has obstacles. NBC didn’t answer for the other world leaders in attendance who managed to stay awake during the entire session. Otherworldly humans, no doubt.

O’Donnell also reminds us that Biden is old, saying he “turns 79 later this month.” So is O’Donnell suggesting Biden’s age is an issue? If so, why did NBC say Biden’s age was a non-factor all of last year leading up to the election?

You have to give NBC credit, though. It’s rare to see one of the blue-chips — NBC, CNN, ABC, CBS, New York Times, and NPR — separate. As of publication, only NBC had spent the day telling the country Biden works a busy schedule.

Because of Biden’s nickname and face, this is so going on a t-shirt: 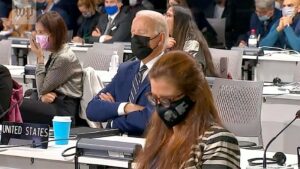