The relationship between the NBA and China is a bit fishy. Everyone knows it, but hardly anyone says anything about it. There are some who are willing to ask the tough questions though.

Sen. Marsha Blackburn (R-Tenn.) is one. On Thursday, she outlined her questions — or concerns — about the relationship between the NBA and China in a two-page letter that was sent to NBA commissioner Adam Silver.

A recent television agreement between the NBA and China Central Television (CCTV) seems to be the root of Blackburn’s concerns. There are plenty of other things she could question as well, but we’ll take it.

Blackburn says that China will censor any broadcast from CCTV that’s a threat to the Chinese Communist Party. She takes issue with the NBA looking to mend the relationship with the foreign nation in the midst of COVID-19 origin reports. 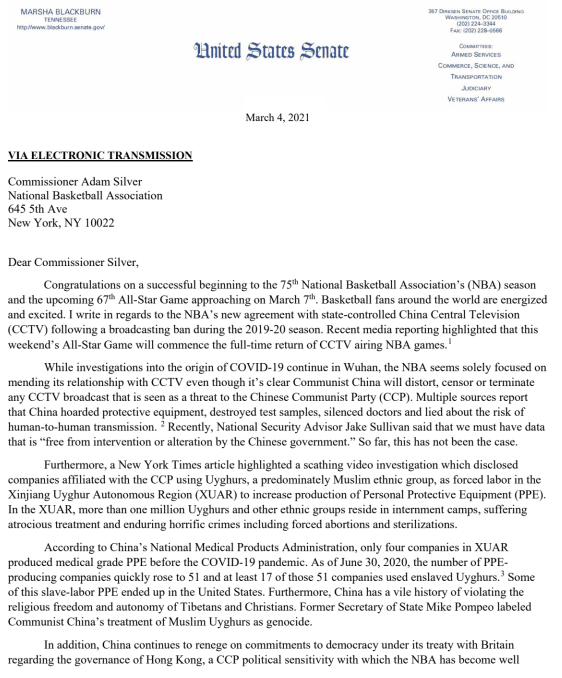 Click here or on image above to read full letter

“While investigations into the origin of COVID-19 continue in Wuhan, the NBA seems solely focused on mending its relationship with CCTV even though it’s clear Communist China will distort, censor or terminate any CCTV broadcast that is seen as a threat to the Chinese Communist Party (CCP),” she says in the letter.

NBA games will return to the Chinese television network after they were banned for the entirety of the 2019-20 season because former Houston Rockets GM  Daryl Morey (now with the 76ers) tweeted his support for Hong Kong. It took some serious sucking-up from the NBA in order for CCTV to agree to broadcast the games once again, and now it’s time for their reward.

It looks bad, and the NBA knows it.

The scathing letter from Blackburn is certainly worth your time. Check it out here.