The race on the track of Bristol was wild and out of control last year. Not only did they dump over 23,000 cubic yards of dirt onto the normally smooth surface of the track, but some overnight rain then made things even crazier. So, naturally NASCAR decided to do it again this year, this time running on Easter Sunday and hoping to bring back the same intrigue of 2021.

Make sure to checkout the latest betting odds for the Bristol dirt race at FanDuel.

After rain poured down last year, the track crew couldn’t get enough done to get the surface ready for the Sunday race, so they had to postpone it to the following Monday. This doesn’t look to be the case this year. Weather forecasts are calling for partly sunny skies and some cold temperatures.

Last year, Joey Logano started 10th and made his way through the field with ease, leading the final 61 laps en route to the win. It wasn’t easy for Joey at the end when he had to hold off a final restart that sent cars all over the track. But the spectacle of it all brought out the fans and television viewers for this event, which has only happened twice in the last 50 years. 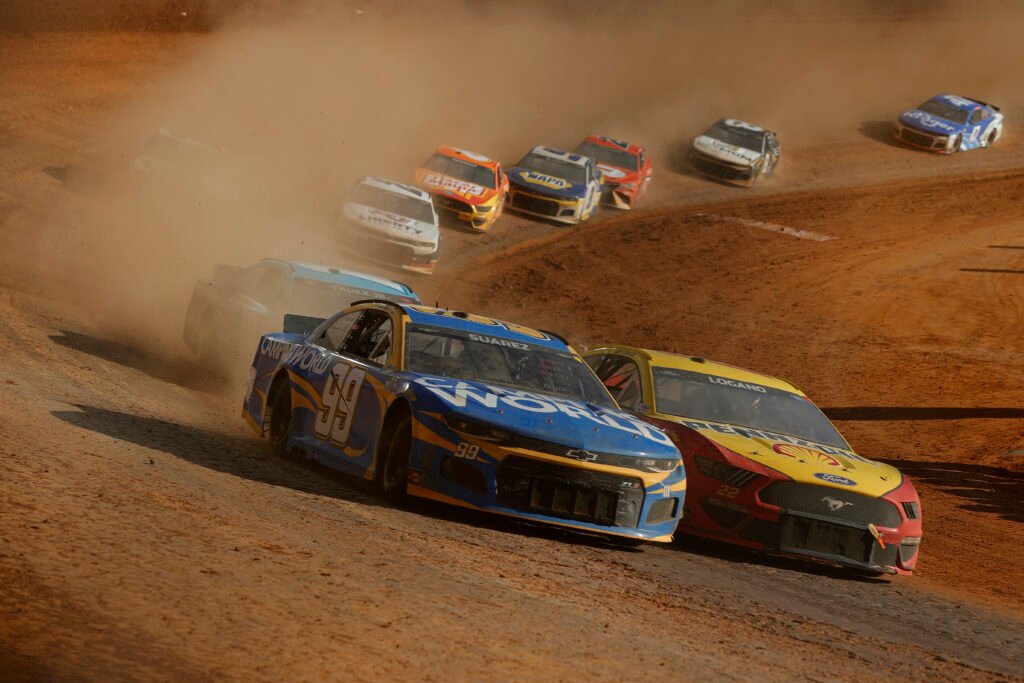 The odds-on favorite this year is Kyle Larson, who is the dirt expert of NASCAR drivers. This man has won every type of dirt race you can imagine, but that doesn’t mean he’s certain of victory.

“With it being a dirt track, people look at me with all the experience that I have on dirt as being even more of a favorite. But these cars are way different than what I typically race on dirt.”

The temporary dirt track surface at Bristol looks pretty amazing when you are watching from the stands. One of the problems that teams ran into at last year was that they couldn’t see out of the windshield because a collection of dirt mustered on their cars. It’s not common for dirt race cars to have a windshield, so hopefully they figure out how to combat the issue this weekend.

Austin Dillon, Joey Logano, Chase Elliot and Harrison Burton will all run the truck race on Saturday night in hopes of preparing for what’s to come on Sunday. But make no mistake, even with all the practice in the world, Bristol can still come back to bite you. This is the same track that gives us some of the best short track racing in the country. So, add a bunch of dirt on top of the surface and we’re bound to get another close finish like 2021.

“Driving the No. 7 Chevy Silverado at Bristol this weekend is definitely something I’m looking forward to,” Chase Elliott said in a team release. “These trucks always look like a lot of fun to race on dirt, and this team has had some great runs this year and put together a solid program in a short amount of time. I’m excited to see what we can go out there and do on Saturday night.”

Riding up to the ‘Last Great Colosseum’ is almost magical. The gigantic stadium is just nestled into the mountains of Tennessee. Then just outside the stadium, around the campgrounds, spectators get lubed up for the upcoming parties, which are just as fun as what goes on inside on the racetrack.

Since this type of race only happens every so often, besides the track series, it’s become a must-see event for racing enthusiasts. Heck, even those who aren’t into NASCAR should still tune in on Sunday night to see these cars try to bustle around the track and drift around the high banks.

Here are the schedules for the upcoming weekend. The truck series gets us started after Cup qualifying and practice:

This is bound to be a fun race with more than a few parties breaking out in the campgrounds scattered around the speedway. If you’ve never been to a Bristol race before and are a fan of the sport, I suggest you make it up near the Virginia/Tennessee border sometime in the future. There’s nothing quite like it in all of sports. But this weekend, with the track covered in dirt, we are getting something a little extra on the side. Tempers are likely to flare and expletives are likely to abound over the radio. In other words, it sounds like a good time.