I’ve known for about a year that my brother-in-law collects typewriters and known for an equal timeframe that my sister laid down the law and said that they were only allowed to own three typewriters in their 1.5 bedroom apartment on the upper west side of Manhattan.

What I didn’t realize until today was that my brother-in-law’s typewriter collection was inspired by Tom Hanks, who apparently owns over 250 of the old school word processors. Well, you read the title: He wrote Tom Hanks a typewritten letter, and Hanks wrote him back. 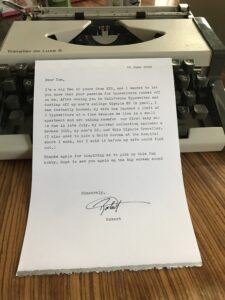 And here’s the response: 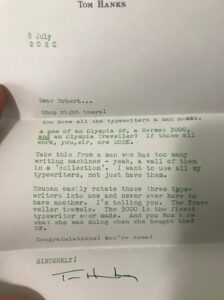 There’s probably not a story out there that I wouldn’t believe about Tom Hanks being a good human — even if this letter was actually produced by someone who works for him (for the record, I’d bet it wasn’t), that the letter was even returned at all was a really thoughtful gesture.