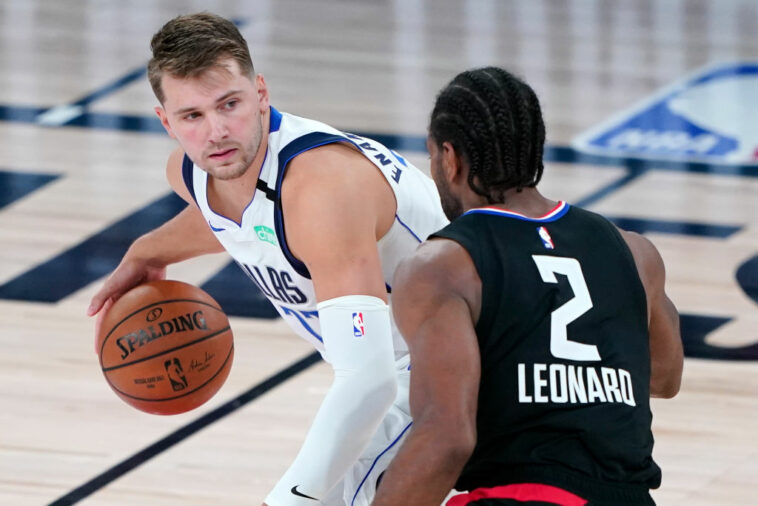 LA Clippers forward Montrezl Harrell and Dallas Mavericks Slovenian star Luka Doncic got into a scuffle last night that ended with Harrell calling Doncic a “bitch ass white boy.” The exchange went viral last night. If you didn’t see it, here it is:

The solution here is simple, even if many won’t like it: the NBA has to suspend Montrezl Harrell and send a message that race-based derogatory comments like his on the basketball court won’t be tolerated. The NBA has already set this precedent with gay slurs on the court, why not with racial-based insults as well?

Montrezl Harrell’s comments have already spawned a million “If the races were reversed” conversations on social media and there is no doubt that if Luka had referred to Montrezl Harrell as a “bitch ass black boy,” that the social media condemnation would have rained down from the heavens on Luka. In fact, Luka would probably be suspended for the remainder of the season. He would be crushed, a social pariah in all of sports.

There’s no doubt that the reaction to Harrell is far less condemnatory. At least so far. Which is why the NBA needs to act and explain that equality isn’t just a slogan on LeBron’s sneakers, it’s a way of life in the league going forward. Suspending Harrell would send a powerful message to everyone in the NBA and to all sports fans as well — we have one standard in this league for all players, race-based insults aren’t permitted.

The NBA’s ratings are tanking, at least in some part, because much of America doesn’t consider the NBA players, who make hundreds of millions of dollars a year, to be victims. Black NBA players have free rein to not only be upset about the impact of racism’s long shadow in our country, but also to simultaneously act in ways they wouldn’t accept from other races, citing the fact that they are racism’s victims as a defensive shield.

Harrell’s comments calling Luka a “bitch ass white boy,” will be defended by many who claim to care about social justice. Yet if Luka had called Harrell a “bitch ass black boy,” almost no one would defend those comments. That discrepancy isn’t healthy for our country or the NBA. We need to work towards common standards for all, regardless of race. If Luka’s comments would be unacceptable and greeted with a suspension then so should Harrell’s. (The irony here, by the way, is that Harrell is the far weaker player. If anyone’s the bitch in this battle of basketball combatants, it’s Montrezl).

No one’s here to argue we should hit our black community with Will Smith’s memory-erasing device from “Men In Black.” We can’t erase or forget the past, but we have to attempt to apply even standards to all in sports, our nation’s best example of fairness and equality among the races, in order to grow as a nation.

Otherwise we risk remaining perpetually lost in the past. Race relations have became so polarizing in the United States that we have many in the black and white communities believing anger will heal this country. Doubling down on anger to heal our racial sins is ultimately self defeating, however, because it prolongs our racial discord.

In my opinion, the best way to move this country forward is to discuss how we can improve things for all people, instead of bickering over what we’re all owed. Hatred won’t open the eyes of our white community, they’ll shut the game off. And our black community won’t ultimately win by being able to hurl racial insults at white players, we all lose instead.

If Luka screamed a hateful message rooted in race to Harrell would the black community lend an ounce of defense for him? Not a chance. So we shouldn’t do it for Harrell either. We all need to try and treat everyone equally, not setting up a scoreboard of acceptable sports behavior based on the race of the speaker.

If the NBA wants to truly live up to the ideals they espouse on their jersey messages and open the eyes of all sports fans to true equality both on and off court, there’s only one result that makes sense: suspend Montezl Harrell and send the same message to him that they would have to Luka.

Equality can’t just be a slogan in the NBA, it has to be a promise too.

Gary Sheffield Jr is the son of should-be MLB Hall of Famer, Gary Sheffield. He covers basketball and baseball for OutKick.com, chats with the Purple and Gold faithful on LakersNation, and shitposts on Twitter. You can follow him at GarySheffieldJr