A number of years ago, my old friend Chris, a former high school head football coach and an overall avid sports fan, posted a message on Facebook that read something to the effect of “If you don’t like the movie Moneyball, please let me know so that I can unfriend you.”

I laughed when I read it, and I’m fairly certain I “liked” it because it accorded so well with my own impressions of the movie. It’s a good, clean, feel-good movie that makes you fall in love with the game all over again. When you watch a movie like that, starring a very handsome Brad Pitt, how can help but be a bit romantic about baseball?

To answer that question, we must turn to Astros Hall of Fame 1B Jeff Bagwell, who wrecks all of our dreams and calls Moneyball “a farce.”

Nowadays, Bagwell, who retired in late 2006, provides color commentary for Houston, the team that made him a star. In the top of the second in the Astros game on Wednesday, Bagwell discussed his assessment of the movie.

“I just think Moneyball is a farce,” he said. “They had the three best pitchers in baseball. You could’ve stuck anybody out there. My son’s 15-year-old team could have been out there with those three pitchers.”

The three pitchers to whom he refers are Mark Mulder, Tim Hudson and Barry Zito. Bagwell continued:

“The Braves won for 15 years with (Greg) Maddux, (John) Smoltz and (Tom) Glavine,” he added. “They mixed in some other great starters around them, and they had to score three runs a game. And won 15 years in a row. Why aren’t they called the Moneyball team? What’s the difference?

Bagwell admits that there are some redeeming qualities to the movie, as well as the strategy after which it is named:

“I like the concept of getting on base, don’t get me wrong, but to make a movie about it? And to get all this credit that they were so smart?”

I must confess that Bagwell has a point. For all of the success that the A’s of the early 2000s had, they never actually won the World Series. And, as many have long argued, a commitment to analytics and moneyball is at least partially responsible for the lackluster product we see all too often on too many MLB diamonds these days.

Bagwell may be a moneyball wet blanket, but sometimes, we need a wet blanket to wash some of the pixie dust Brad Pitt sprinkles in our eyes. 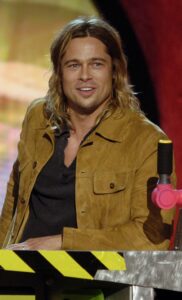 Just because it doesn’t work as a long-term MLB philosophy doesn’t mean we can’t appreciate a fine, family-friendly sports film when we see one. My other friend, OutKick’s own Alejandro Avila, urged our readers here to watch Moneyball over the July 4th holiday weekend last summer, and it’s not bad advice this weekend either.

Friends, feel-good movies, and baseball. Now, that’s the kind of good, old-fashioned Americana that I’m sure even Jeff Bagwell can support.