Kimes met with Bass over the weekend and came away so impressed that she’s now encouraging sports fans in LA to vote for Bass. 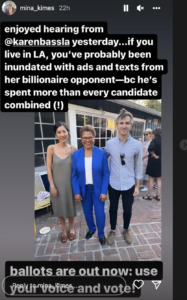 That is Kimes doing Bass’ bidding. She’s promoting a talking point that Bass will lower taxes in Los Angeles while smearing Bass’ opponent Rick Caruso, a former Republican. Kimes calls Caruso a “billionaire” to suggest that he’s another Donald Trump and Michael Bloomberg.

Kimes is using her social platform that ESPN built to promote a far-Left candidate, even spreading Bass’ political messaging.

We have reached out to ESPN for comment. But because Kimes calls anyone who questions her a sexist bigot, don’t expect ESPN to respond.

This is what Sage Steele is referring to in her lawsuit, alleging ESPN selectively enforces its ban on discussing politics.

Suffice to say, ESPN would not allow Steele or Matt Barrie to post a photo with a Republican candidate. Can you imagine if Steele endorsed, say, JD Vance for the Senate while attacking his opponent on her social media page? Indeed, ESPN would take more opportunities away from Steele.

So next time Kimes posts on Twitter that she’s a victim in the world of sports, know that she’s one of the most privileged people in media. On top of making her the only non-former football player to hold the “NFL analyst “title, the network consistently permits her to inject her political views into her ESPN brand.

For a recap of Bass, she’s the one who called for police to detain Kyle Rittenhouse and his mother, telling her supporters they are dangers to society. Bass is on the fringes, much like Kimes.

To show how far-Left ESPN is, consider that most CNN pundits do not openly endorse a candidate. They may do a poor job of hiding their biases, but few CNN commentators take photos with, and tell viewers to vote for, a particular candidate. Believe it or not, CNN does not want its on-air hosts to endorse candidates.

Apparently, ESPN does not mind, so long as the talents agree politically with Mina Kimes and Karen Bass.