That’s why they play the games: Mike Leach and Mississippi State went into Baton Rouge and defeated defending champion LSU last week (LSU lost a million players and coaches, but still) and then lost 21-14 at home to Arkansas tonight. The Bulldogs were underdogs by about 17 points last week and favored by about that much tonight.

KJ Costello, who had a record-setting performance last week against LSU in his maiden voyage in the air raid offense, had just 5.1 yards per attempt tonight and threw three interceptions.

By the way, we should also give Arkansas some credit. In their first game with journeyman football lifer Sam Pittman as head coach, they played Georgia tough into the second half. Tonight, they went into Starkville and beat a Mississippi State team that had climbed to no. 16 in the country after their win over LSU. It’s early, yes, but maybe the Razorbacks, who just won their first SEC game in nearly three years, are on an upward trajectory? 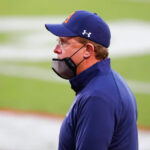 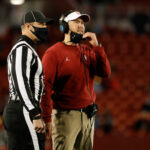