There are horrible ways to die, and then there’s the way a 26-year-old Michigan man was killed over the weekend outside Flint. He was an innocent bystander at a baby shower when a “small cannon device” blew up and sprayed shrapnel into him.

According to a local news report, the man, Evan Silva, was taken to a nearby hospital where he later died due to shrapnel wounds. Cops say the device was supposed to make more of a flash-bang.

The Detroit News reports, “The cannon the homeowner fired was similar to a Signal Cannon, more commonly used as a novelty item. Police said the homeowner bought the cannon at an auction prior to the event and had fired the cannon several times before.”

Gun powder loaded into the cannon caused a “fracture, resulting in shrapnel being spread in the area,” the Michigan State Police suspect. Silva is said to have been 10-15 feet away from the blast.

The New York Times reports the gathering was for a baby shower and not a gender reveal, as some outlets are reporting. Four or five people were in the backyard when the incident happened.

It’s unclear whether the signal cannon was supposed to set off as part of a gender reveal, but at this point, it doesn’t matter. Silva is dead, and a family is dealing with the loss of their son and brother. A GoFundMe to cover Silva’s funeral costs raised over $10,000 in 17 hours. 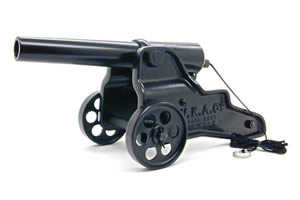