Just when you thought you’d seen it all from a completely messed up world, along comes Michigan home inspector Kevin Wayne VanLuven who was supposed to be inspecting a house for a buyer’s real estate agent. It turns out VanLuven, 59, spent part of his visit molesting an Elmo doll, and the homeowner’s toddler room camera caught his disgusting act on video.

“Just when I think I have seen it all, someone steps up and surprises me with a new level of disturbing actions,” Oakland County Sheriff Michael Bouchard said in a statement. “Sadly, in today’s world we cannot take it on faith that the people we let into our homes can be trusted. We cannot always presume that employers have done their job and have confidence their employees are trustworthy and are there to do the job for which they’ve been hired. This is a disgusting reminder to be cautious about who you let into your home. The actions of these homeowners will likely prevent this defendant from going into anyone else’s home.”

Not making this up! Home inspector caught on video and charged with "pleasuring himself" with an Elmo doll! From…

According to the sheriff’s department, the homeowners left while the inspection was going on, but the wife was alerted by a nursery camera that there was movement. She checks her webcam app and sees VanLuven molesting Elmo in the closet. Then the scumbag returns the doll to its original location.

When confronted by police, the inspector told the police he moved the doll to further his inspection, but quickly changed his tune when the police told him his disgusting decision was all on tape. He was arrested for aggravated indecent exposure and faces up to two years in prison. As part of his bond, the home inspector is not allowed to be alone in any residential property he doesn’t own. 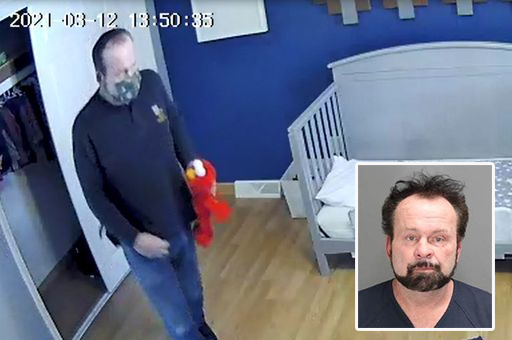 Why post this scumbag? Because you guys need to know that scumbags will not rest until they scumbag every last inch of society. You think this is the first time VanLuven has molested a doll during an inspection? I don’t. Think he would’ve kept molesting Elmo dolls if he hadn’t been caught in this case? I do.