Hornets owner Michael Jordan created a buzz across the world of motorsports when he was photographed hanging with Formula 1 star Pierre Gasly Wednesday.

Gasly shared photos of he and Jordan dining together just days ahead of Sunday’s inaugural Miami Grand Prix. Within the snaps shared by Gasly, the 2016 GP2 Series champion, MJ looks every bit as smitten as the Frenchman.

The shared meal amongst Jordan and AlphaTauri’s Gasly is already leading to speculation that Jordan may want to get into the F1 game. Aside from owning the Hornets and a little-known clothing brand called Jordan, MJ is also co-owner of 23XI NASCAR alongside Denny Hamlin.

Just a couple of goats hanging out, likely dining on something heartier than oats.

The 26-year-old Gasly posted two photos and a quick video of he and MJ hanging in Miami with the caption: “Unforgettable dinner! @(Michael Jordan),” and included a crown emoji, clearly recognizing he was splitting dinner rolls with royalty.

To be clear, Gasly’s photos weren’t of the walk by, interrupt your dinner, keep it movin’ variety. Jordan was every bit as interested in posing for pics as Gasly was. MJ even tossed on Gasly’s F1 helmet and struck a pose and also signed a pair of sneakers. 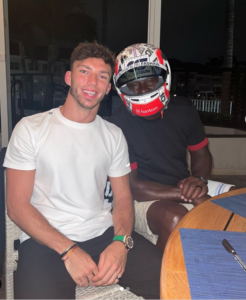 The Miami Grand Prix is still days away, but regardless of where Gasly finishes, he’s sure to leave Miami feeling like a winner.