Well, here is a turn of events. 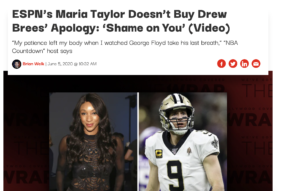 The Falcons host the Browns at 8pm ET tonight on NBC. pic.twitter.com/9SZ7UAMyw9

You may remember that Drew Brees turned heel last summer for the worst possible reason: he expressed support for the American flag and for American service members.

“Shame on you,” Taylor said on First Take, in reference to Brees. “Would Drew Brees do this if there was no backlash? Did [his] heart actually change?

“You were not doing the right things before, and I really wonder why the apology is happening now,” Taylor goes on.

“I’m exhausted and I’m tired of having to listen to someone say something like that, and then having to sit back, ‘Well, maybe he didn’t. Maybe it’s not in his heart.’ When you reveal yourself to me and you say something like that and say it out of an intolerant mind and/or heart or a non-empathetic heart and for the last five years all we’ve seen is countless deaths in the street.

“My patience left my body when I watched George Floyd take his last breath.”

So one of two things are true:

1) Maria Taylor is a forgiving person who doesn’t hold a grudge and who always puts the team first. (Somewhere the now-canceled Rachel Nichols just fainted.)

2) Taylor was never actually mad at Brees. Instead, she just got performatively mad for the brand.

See, when Brees expressed his patriotic fervor, Taylor saw an opportunity, one that she thought would triple her market value. It almost worked, by the way.

Before Maria Taylor asked for $8 million a year during contract negotiations, she was one of ESPN’s most promising broadcasters. Had she not turned into a slightly less angry version of Keith Olbermann, she could have eventually succeeded Stephen A. Smith as the face of ESPN.

However, that all changed last summer.

While ESPN had become more racialized for years, racial tensions reached a peak after George Floyd’s death. Last year, ESPN talents gained leverage by making headlines involving racial matters. Taylor and her then-colleagues seized this moment and used Brees as a launching point. By pretending Brees’ patriotic comments were offensive, they capitalized on ESPN’s cowardice. They knew that the network would never push back. You could call that fraud or business. Honestly, the two words often mean the same.

Though Brees also looks like a coward by chumming up with Taylor as though nothing happened, there’s not much he can do. If Brees crosses Taylor, it’s over. In comes Taylor’s army at the New York Times. An army like that doesn’t stop after a victory. The collapse of Rachel Nichols was only a tease. Someone is next. Brees is trying to make sure it isn’t him.

Anyway, I wish the new rookie NBC Sports duo the best. As long as Brees agrees to play Robin to Taylor’s Batman, this combination could work, at least for a year or two.