A year ago this time, professional sports began to fall in line with the rest of the country when NBA players started to test positive for COVID-19. The NBA and NHL soon afterwards suspended operations, the XFL ended, baseball canceled traditions with delays to the season, and the NFL faced a state of uncertainty.

Despite inaccurate predictions and calls to cancel the football, hockey, and baseball seasons (one is missing, you may see), all four major leagues were able to start or resume and then finish their seasons. Most outlets won’t tell you this, but that’s incredible. Of course, from a business perspective, all four took substantial hits, as did most businesses in 2020.

As this Forbes chart shows, it got ugly: 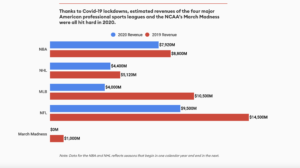 The differences between the four leagues depend on factors such as empty seats, missed games, concessions, sponsorships, TV broadcasts, and shortened seasons. The MLB notably held just a 60-game season, compared to its usual 162.

One could focus on the losses. However, the far more interesting story is the expected rebound.

With vaccine rollouts well underway and states reopening, the worst days of COVID are likely over. It’s unclear exactly when sports will return to quote-unquote “normal,” but indications are promising.

The MLB All-Star Game is planning for full capacity in Atlanta on July 13. Presumably, some baseball stadiums could open before that date. Reports suggest herd immunity will be reached well before the football season, indicating a relatively normal NFL year is on the way. The NBA and NHL will have to deal with COVID for the rest of their seasons, yet should expect positive 2021-22 seasons.

While the lost revenue from 2020 is, well, lost, the sports leagues are in good positions moving forward.

The NFL especially is about to cash in with massive, unheard of, make-Goodell-flinch broadcast contracts with Disney, NBC, CBS, Amazon, and NBC. The exact figures are not yet official, but each network is about to pay more. A lot more. Corporation-changing more.

The NHL is close to announcing new TV deals as well, with an expected financial bump from ESPN.

Should the MLB strike a reduced TV deal with ESPN, a new expanded playoff round and more exclusive inventory for RSNs could offset that loss. In 2020, the MLB also reached a new deal with Turner that increased from $325 million to $535 million annually.

Finally, it’s plausible, if not likely, that many sports fans are aching to get back to games this season after missing out over the past 12 months. I’m more excited to go to a baseball game this season than I’ve ever been. Clay Travis has said on Fox Sports Radio that he believes the same.

There was a lack of interest in sports in 2020, with the NFL and MLB seasons dipping and the NBA tanking to all-time lows. With COVID less of a draw to the news networks, Americans can relax more and turn to sports. Donald Trump and the election are also in the rearview mirror for now.