Wearing Patrick Mahomes’ wig is almost as bad as blackface, at least according to a journalist from the Kansas City Star.

The writer is very bothered that a school teacher, who is white, dressed up as Mahomes, who has a white mother and black father, on Chiefs Spirit Day, calling it “totally unacceptable,” “appalling,” and even “hideous.”

You might ask, aren’t Mahomes’ costumes — which include his headband, wig, and jersey — sold all over? Yes, but according to this writer, that doesn’t matter. It’s still “terrible.”

“The replica hairpieces were for sale at some grocery stores, and knockoffs are readily available for purchase online.

“But that argument doesn’t hold weight for me. The headband-wig combo was a bad idea from the start. One look at the distasteful photo and it’s easy to see why students at Shawnee Mission East were offended.”

Uhh, it does not hold weight.

As usual, the topic made about race has nothing to do with race. People wear Mahomes’ headband and afro because it’s his signature and he’s a superstar. That’s the reason the distinctive look is sold in local Kansas City grocery stores.

People have also worn costumes of James Harden’s beard and Aaron Rodgers’ mustache, two other fun looks that honor great players. Want to stick with wigs? Too bad no store sold signature blonde puffy wigs over the past four years, sometimes even to go with an orange face mask, black suit and red tie.

I got to say, outrage pieces like these take a special level of creativity.

Does Mahomes feel the same way? Does he think a white person wearing his wig is a sign of racism? We don’t have a direct quote, but pictures, as the Kansas City Star notes, last forever: 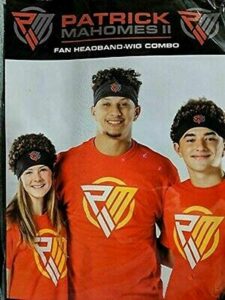 Almost as bad as blackface, the op-ed says…