Bill Belichick, he did it again. New England drafted Mac Jones Thursday at 15th overall, 12 spots below where the mocks projected. In other words, Belichick and the Patriots got the steal of the night. Of course, they did.

It’s not only that the Pats got a QB at great value, it’s the QB they got. Mac Jones was born to play for Nick Saban and Bill Belichick, he will now have played for both. Jones is disciplined, smart, accurate, efficient, and a winner. He’s a Patriot, a Belichick kind of guy.

Jones’ only knock is athleticism, a QB trait Belichick may know how to offset. Remember this dad bod? 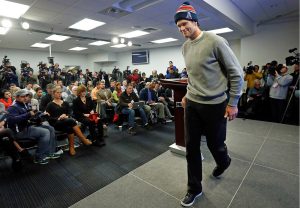 New England was already a winner in the offseason, spending big in free agency bolstering the roster into a playoff contender. Jones is entering a locker room full of talent.

The Pats are also in no rush to start Jones. Cam Newton was brought back this offseason and is still, at least, viable. Though, at the latest, Mac Jones will be the better option come midseason.

Mac Jones will not be the best QB in this draft, that’s Trevor Lawrence. However, of the five selected thus far in the first round, Mac Jones is best positioned for early-career success.

Many of us enjoyed watching New England fade into irrelevance last season after two decades of unprecedented success. We enjoyed it.