Chicago’s lunatic mayor Lori Lightfoot got onstage at Lollapalooza over the weekend and told the crowd estimated at over 100,000, “Thank you for masking up and vaxing up.” Lori was completely confident that the festival had done the right thing — requiring proof of vaccination or a negative COVID test to get in — that she praised Lollapalooza organizers.

“The Lolla team has been phenomenal. They’ve hired their own public health experts who’ve been working hand in glove with us since we started these discussions.”

It seems as if part of that “working hand in glove” included a vaccination check where concertgoers were required to show a vaccination card or some sort of proof that they weren’t carrying the ‘VID. Lori and her team were super confident that this was going to be a vaxxed up utopia. The Holy Grail of vaxxed concerts.

Don’t take my word for it. Take the word of Dr. Allison Arwady of the Chicago Department of Public Health

“I’m certainly hopeful that we won’t see a significant problem,” Arwady said last week. “And I certainly know we’re being a lot more responsible than many other settings that are just as large that are gathering around the country.”

There it is…Dr. Arwady going mic drop that Lollapalooza would be super careful with the ‘VID. You can trust us in the blue states, is what Ms. Arwady was saying. Those red states are trying to KILL YOU!!!!

Chicago Tribune photo intern Vashon Jordan Jr. was at the gates where the vaccination cards were being checked and flat out says IDs weren’t being checked against the cards. Lightfoot’s COVID theater was clearly a sham.

Gates are open for day three of Lollapalooza at Grant Park in Chicago.

This is the health screening line where festivalgoers have to show proof of vaccination or a negative COVID-19 test result obtained within 72 hours (3 days) of attending #Lolla pic.twitter.com/R2DjQ7zwGb

No, but that is actually a good point.

Vashon went even further with his reporting. “Fake COVID-19 vaccination cards are 100% a thing at Lollapalooza in Chicago,” he tweeted. “You can get it with a single-day wristband for $50. I have confirmed that it does work.”

Lightfoot fired back Tuesday saying she’s completely confident in the checkpoints because her health commissioner “went incognito” and was turned away due to invalid proof of vaccination. Yeah whatever, Lori.

“We checked with them every single day, multiple times a day. We had our people at the screening checkpoints. And I will tell you Dr. [Allison] Arwady, the public health commissioner, kind of went a little bit incognito, didn’t have all her paperwork right and they wouldn’t let her in,” Lightfoot told said during an interview with WVON. 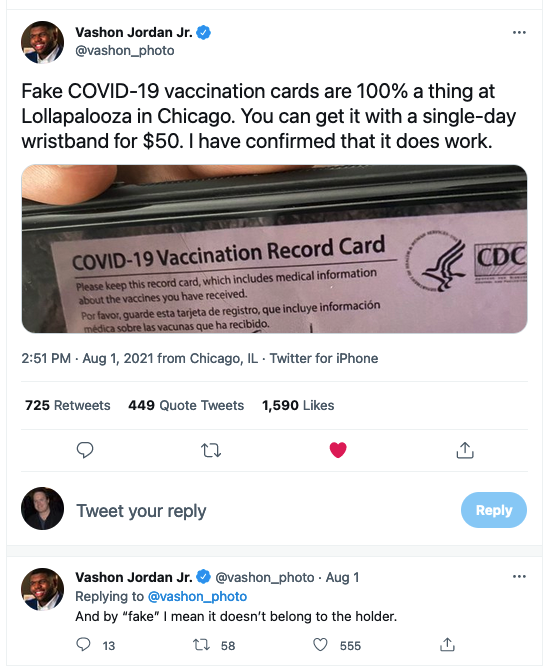 Lollapalooza was so secure that Vashon reported that a concertgoer was able to bury a bottle of Tito’s three weeks before the show only to get in and dig it up to suck down while at the festival. This is Lori Lightfoot’s Chicago. People think of everything.

Digging up a bottle of Tito’s vodka that was buried three weeks ago. #Lolla

(Names and video credit are being withheld by request.) pic.twitter.com/JsqZD1GxVA

Well, #Lollapalooza is officially here and underway. Here's a video I took this morning from the Harrison entrance as the gates opened.

Fans were asked to show a copy of their COVID vaccination cards or proof of a negative test if they're unvaccinated. pic.twitter.com/zEmxIBBRxc

And then you have this at the festival. I don’t see vaccination records from you kids!

2/ Or sneak around back. pic.twitter.com/GYJPhzcmKP

1/ A glimpse of the future of vaccine passports from Lollapalloza.

Just hold up any piece of paper that looks official. pic.twitter.com/bVXEVC2u5k