Sarah Fuller made history on Saturday when she became the first woman to participate in a Power Five college football game. Many had hoped her first play would have more meaning, but the Vanderbilt offense wasn’t willing to help in the first half.

Fuller finally got her moment on the opening kickoff of the second half, but it was unfortunately a dud. Kicking a field goal or extra point doesn’t really compare to kicking off. It is a much tougher ask, so the unintentional squib kick didn’t look great — but it was understandable.

The Twitter reactions were all over the place, but the account for Dan Le Batard really made a statement. The tweet read “equality means I can say this kick was terrible” before quickly being deleted. 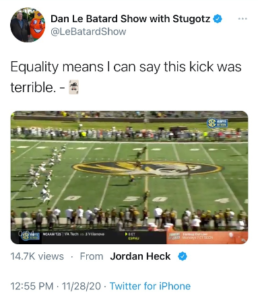 Fortunately for Vanderbilt, the historical moment from Fuller will overshadow the fact that they got trounced by Missouri 41-0. That puts the team’s record at 0-8 this season.