Penn transgender swimmer Lia Thomas is one step closer to winning a NCAA championship after a dominant performance in the 500 freestyle prelims Thursday morning in Atlanta. Thomas set a new top time in the nation this season with a 4:33.82 in the prelims that featured Olympian Brooke Forde of Stanford.

In January, Sports Illustrated sportswriter Pat Forde, Brooke’s father, read a prepared statement on a Yahoo college football podcast where the family shared its stance on Brooke, who won a silver medal at the Tokyo Games as a member of the 4×200-meter freestyle relay team, facing the transgender swimmer in the NCAA Championships.

500 free prelims @NCAA champs this am. Thomas in the lead for tonight. Note: the audience doesn't cheer until 2nd and 3rd WOMEN finish. #SaveWomensSports pic.twitter.com/SL8eM4fT2b

“I have great respect for Lia,” Brooke Forde said in her prepared statement. “Social change is always a slow and difficult process and we rarely get it correct right away. Being among the first to lead such a social change requires an enormous amount of courage, and I admire Lia for her leadership that will undoubtedly benefit many trans athletes in the future.

“In 2020, I along with most swimmers, experienced what it was like to have my chance to achieve my swimming goals taken away after years of hard work. I would not wish this experience on anyone, especially Lia, who has followed the rules required of her. I believe that treating people with respect and dignity is more important than any trophy or record will ever be, which is why I will not have a problem racing against Lia at NCAAs this year.”

Lia Thomas goes 4:33:82 in the 500 prelims at the NCAA Championships which is a new top time in the nation this year.

Pat Forde's Olympian daughter has her work cut out for her later tonight in the finals. pic.twitter.com/QLbsHgMDKB

Thursday morning in Atlanta, Lia Thomas jumped in the Georgia Tech pool with seven biological female swimmers and destroyed them in the prelims. Pat Forde knew in January what his daughter would be up against at the NCAAs, but he now finds himself in a position where his daughter could lose a national championship in her senior season to a biological male.

“People don’t necessarily have to agree. I’m not sure I agree completely because I’m not sure this is a level playing field,” Pat Forde said in January. “My daughter’s thing is, ‘I’m the one who has to get into the pool with her, and I’m fine with it,’ so I think some people could take a good lesson from that.”

That said, Pat Forde also thinks that this is a politically driven story. 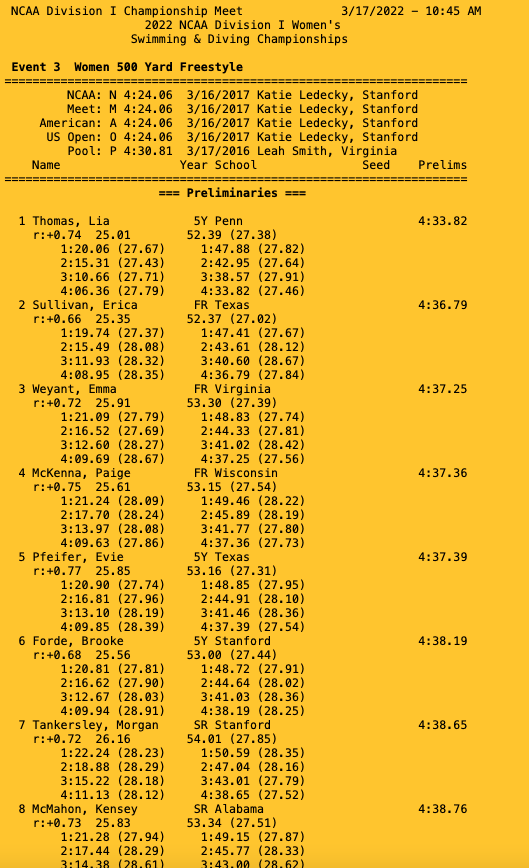 “Do we ever get to a point where we have a third category at the college level, men’s swimming, women’s swimming and transgender swimming?” he asked on the January podcast. “It is funny. Some of the folks who are really wound up about this and screaming about the fairness about women’s sports really don’t give a damn about women’s sports. They are using this as a political wedge issue, and they are using it as a sign the country has absolutely run amok and has lost its mind to political correctness and blah blah blah. There are a lot of political opinions about this, but some of them are cloaked, I think, in bogus terms.”

Lia Thomas swims for the 500 freestyle national championship tonight at 6 ET. You can watch it here.