It may very well be that, like the rest of us, he focuses on his physique when he must — during the season — and then relaxes the diet and workout regimen a bit when he doesn’t.

Here he is on Day One of minicamp, looking anything but mini: 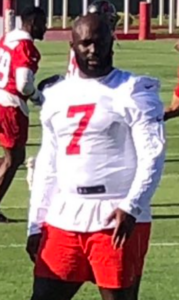 While the jersey is certainly doing him no favors, it’s not the only problem here. Fournette insists that he’s currently “240-something” lbs, a mere 12-15 lbs more than he was back in late January, but we’re slightly skeptical about that. 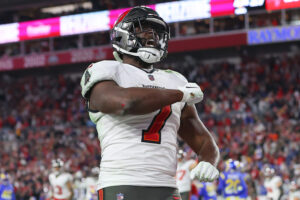 For the sake of argument, let’s just call it an even twenty. Not a big deal, especially for an NFL RB with money for special diets and access to some of the best training facilities in the world.

Plus, he may have even added the weight on purpose, trying the old “bulk-and-cut” method to build strength and stamina. He’ll need it. According to one minicamp witness, Fournette looked noticeably “heavy” and that he “struggled some in the heat, dropping a few passes.”

RB Leonard Fournette made his first appearance in the off-season and seemed to be a little heavy and struggled some in the heat, dropping a few passes. But Bowles said he looked fine, especially considering he hasn’t been here in their off-season.

Whether Fournette bulked up intentionally or unintentionally, we wish him — and all others embarking on a weight loss journey — the best of luck.