If Jemele Hill says it, it must be true. At least that’s what LeBron James wants dutiful sports media members to think and tweet.

James is using Hill’s defense of him as validation that he didn’t mean what he said earlier this week about the United States of America, a country James has long accused of being evil and racist.

For a quick recap: LeBron James advised Brittney Griner, a WNBA player detained in Russia, to consider not coming back to the United States.

“Now, how can she feel like America has her back? I would be feeling like, ‘Do I even want to go back to America?'”James said during a promo for his HBO series The Shop.

And before anyone could ask James if he thinks the US should release Russian arms trafficker Viktor Bout, known as the “Merchant of Death,” in exchange for Griner, he tried walking back his comments:

My comments on “The Shop” regarding Brittney Griner wasn’t knocking our beautiful country. I was simply saying how she’s probably feeling emotionally along with so many other emotions, thoughts, etc inside that cage she’s been in for over 100+ days! Long story short #BringHerHome

Got that? Jemele Hill sure got it.

“The fact that some people are trying to use this as some kind of gotcha moment with LeBron is ridiculous. Very clear what he said,” Hill tweets. “There are just some people who are intent on misunderstanding.”

James appreciated the nod from Hill:

LeBron using Jemele Hill as validation of his character is great. https://t.co/1Ci3UQPrXa

LeBron James using Hill — who’s slightly smarter than James but an even bigger race-baiter — as proof of anything is content gold.

First, how desperate was James to use Hill as validation? Could he not find a nearby athlete or current television host? Was Stephen A. Smith that busy?

Settling for a tweeter is a rather interesting choice. Especially one with a follower list of mostly spam bots and egg accounts. (Have you ever seen who follows Jemele Hill?)

Second, their point is easily destroyable. Hill and James claim that people took James’ comment out of context.

If anyone did that, it was James’ own production team, the people who released the clip with the quote in question. It’s even likely James approved the clip, thinking it would earn him more of a cool factor with the wokes.

But Team James miscalculated. The reaction to James’ idiocy was not kind. Too many people asked him why he doesn’t leave the US if it’s such a bad country. I was one of them.

So, now, James and Hill are accusing critics of playing “gotcha.” Wrong again.

Perhaps unbeknownst to this dynamic duo, there is no need to make up examples to “get” James. The examples are well into the open.

— In 2021, LeBron James doxxed a heroic police officer and called for his arrest. He thought the cop was a racist.

What did this cop do? He saved a young black girl from getting stabbed:

LeBron James has now deleted the tweet calling for the cop to be arrested for shooting the woman armed with a knife, but don’t worry. The internet is forever.

I blurred out the officer’s face on purpose. pic.twitter.com/dbv5dPrZ87

“In the NFL they got a bunch of old white men owning teams, and they got that slave mentality. And it’s like, ‘This is my team. You do what the f**k I tell y’all to do or we get rid of y’all,” James said in 2018.

So owners paying black athletes hundreds of millions of dollars is a “slave mentality.” Interesting.

— He once appeared to have lied about someone spraying racist graffiti on the gate of his $21 million Los Angeles mansion.

Years later, there is still no proof.

— He even pretended to read a book.

No one is playing “gotcha.” LeBron James made it too easy for that. And him using Jemele Hill as validation that his comments were reasonable only makes it funnier.

Name a worse duo (the Bidens do not count): 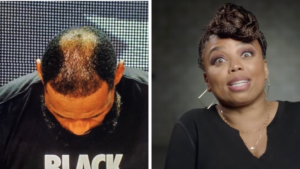