LeBron James will soon find himself playing defense on an unfamiliar court. The NBA superstar is among those who will soon be sued by Kyle Rittenhouse, the 19-year-old who was acquitted of murder and endangering public safety late last fall.

Though the specific wording of the lawsuit has not yet been disclosed, it’s widely assumed that James will be sued for defamation of character and endangerment, stemming from James’ repeated threats and personal attacks against Rittenhouse both in public and through the media.

“Anybody who defamed me, or lied about me, we’re just gonna send them a letter and then deal with them in a courtroom,” Rittenhouse said on a Tuesday episode of Frontlines.

TUCKER: "Will you be suing any news organizations?"

KYLE RITTENHOUSE: "We're looking at quite a few, politicians, athletes, celebrities, Whoppi Goldberg is on the list, she called me a murderer after I was acquitted… So is Cenk [Uyhur] from the Young Turks." pic.twitter.com/MULZf38Vkf

Rittenhouse’s admission that he’s suing James comes on the heels of a Monday announcement that he plans to sue a number of politicians, athletes and celebrities, all of whom he believes contributed to the defamation of his character.

“They’re all going to be held accountable, and we’re going to handle them in a courtroom,” Rittenhouse told Fox News’ Tucker Carlson.

Following his Monday promise to hold those who tarnished his name accountable, Rittenhouse was specifically asked whether LeBron would be included in any future lawsuits, and Rittenhouse responded, “He’ll be getting a letter, too.”

Talk about a full-court press. 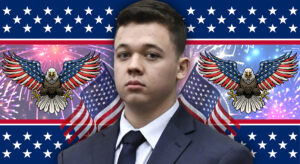