It was a massive letdown of a season for the Cleveland Browns, and a big part of that was the uneven play of quarterback Baker Mayfield.

He started off great, injured his non-throwing shoulder in the third game, and then suddenly, you didn’t know what to expect. Too often, it wasn’t anything good, as the Browns finished 8-9 and missed the playoffs.

Overall, it was a season full of drama (Odell Beckham Jr., anyone?) and underachieving. Two of the Browns’ wins actually came with Case Keenum at QB. Keenum actually went 2-0 on the season. Mayfield was 6-9. 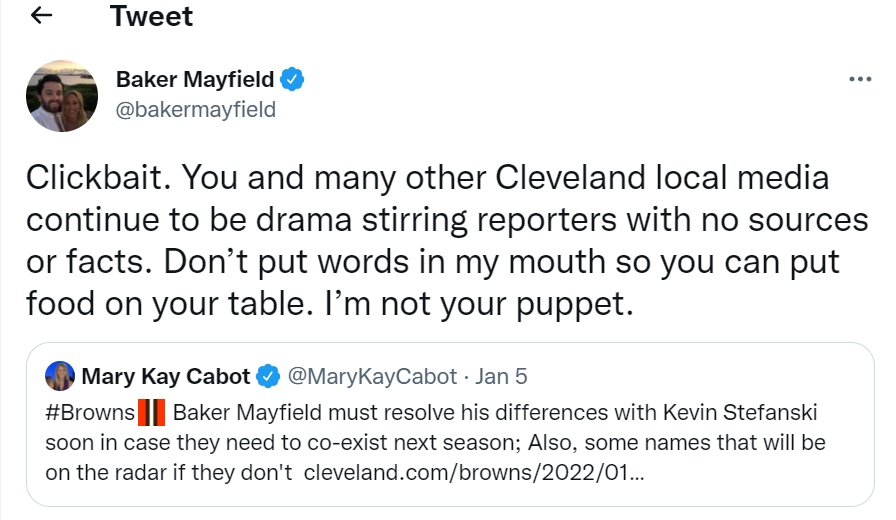 Now, Mayfield will undergo offseason shoulder surgery to repair his torn labrum. And Browns coach Kevin Stefanski suspects Mayfield is likely to return to the player he was before the injury.

“Baker fought through those injuries, was medically cleared to play each of those weeks and practiced throughout those weeks and felt good,” Stefanski told reporters. “I don’t think Baker’s using any of that as an excuse and not denying that guys play through injuries.”

Mayfield has been in the NFL four seasons since the Browns made him the No. 1 overall pick. He’s had two good years, and two bad. This next one will likely determine his future in Cleveland, as he’ll be in the final year of his deal.

“I fully expect him to bounce back next year,” Stefanski said.

He had better. Otherwise, a promising Browns team will suddenly have taken a step back toward the football sewer.