INDIANAPOLIS –The final seconds slowly dribbled off the clock inside Gainbridge Fieldhouse Thursday night, with Kentucky fans standing in around in a foggy haze. When they say that Cats’ fans travel for their team, it’s common knowledge that wherever they are playing, thousands of fans will follow. This was the case again in Indianapolis, with a sold-out arena filled with fans wearing blue.

It’s the overall experience of getting to watch their team play on the road, sometimes with fans that aren’t able to attend games at Rupp Arena. Spread out around the country, there’s a reason why cities that host these tournaments are so excited to see Kentucky come to town, because the money is coming with them. This was again the case for the NCAA Tournament, as thousands of fans overtook the restaurants and bars around the arena, all spending big money to see their team play for hopefully a few games. 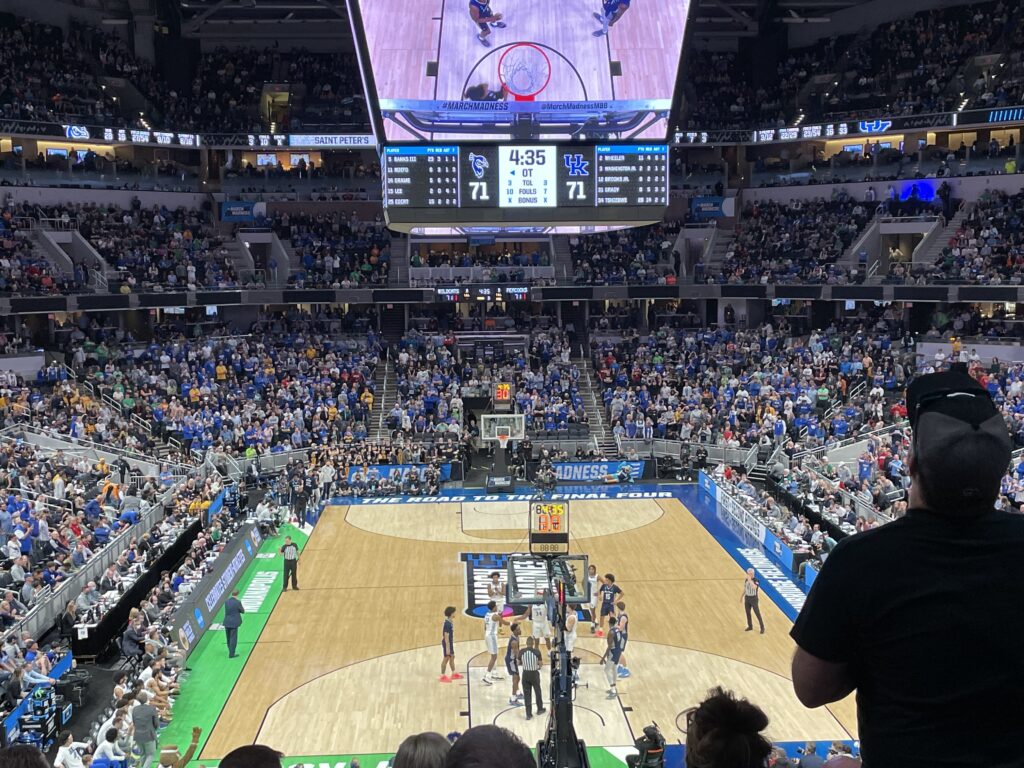 Well, thanks to Saint Peter’s, those same fans were hovering around the arena after the game looking to sell their tickets that they will no longer be needing. I sat around the hotel desk for a few minutes after getting back across the street, watching a line of fans wearing blue try to get out of their hotel reservations that they were planning to use until Sunday. It wasn’t hard to notice the desk clerk become overwhelmed by the amount of people in line at 11:30 Thursday night, desperately trying to save a few dollars and get out of paying for a full weekend. 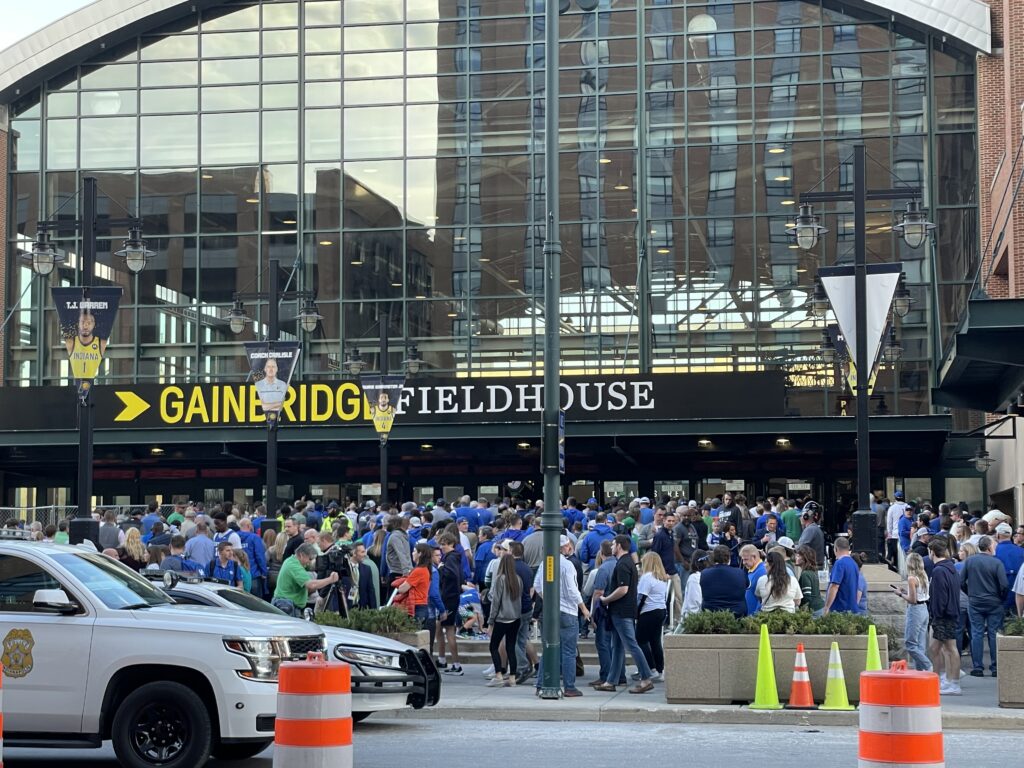 I spoke with a gentleman named Mark, who came into town from Owensboro, KY. He had decided a few weeks ago to travel up for his first ever “March Madness,” having never experienced the tournament before with his favorite team playing as well.

“I spent $4,000 on tickets alone, buying two books for the weekend here. I tried to sell what I had left when I left the arena, but they weren’t offering enough at the moment.”

Mark mentioned that he had bought the tickets through Ticketmaster, so he was looking for any way to collect some of the money he had now lost, planning on being here to see his Wildcats play hopefully Murray State on Saturday. But those plans were quickly erased when his beloved Cats came up short. The amount of money spent on the hotel for him and his wife only made that total for the weekend trip even higher. Think about that for a minute, $4,000 bucks for a weekend of basketball, only to see your team get bounced by a #15 seed. I felt bad for the guy, as he talked about the team not providing much help to Oscar Tshiebwe all night. 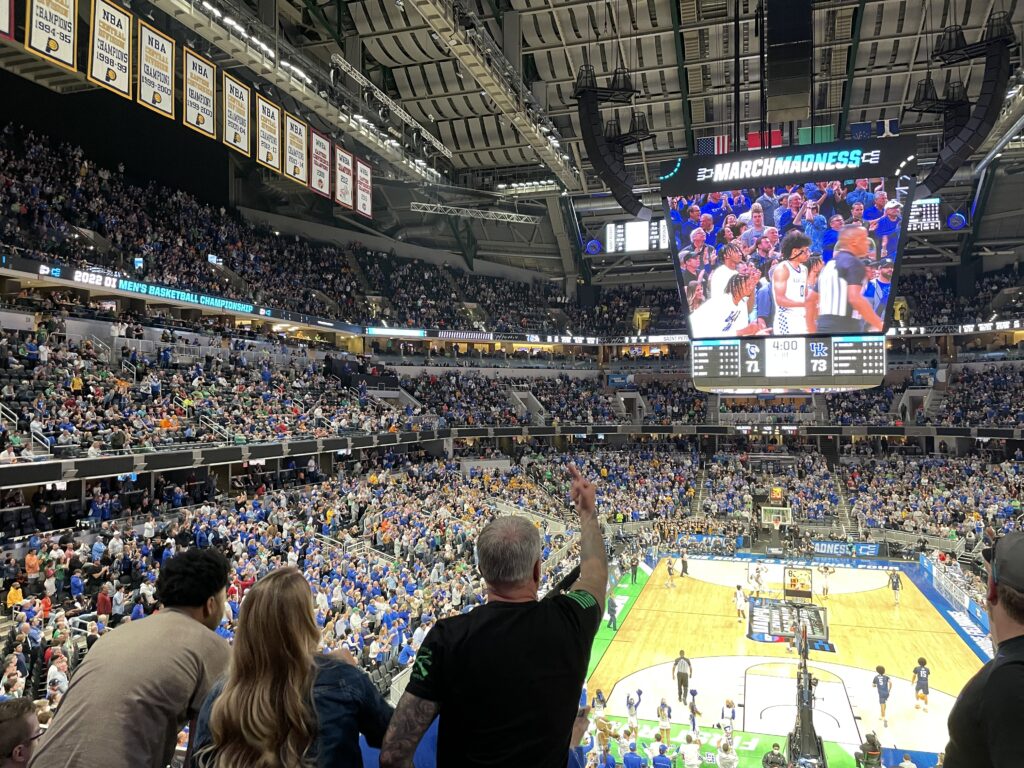 Mark from Owensboro will head home on Friday with a hit to the wallet and a pissed off feeling of how it came to an end for a promising team. I jokingly mentioned that he should send the bill to John Calipari, noting that he could’ve at least coached his team up a bit better. He laughed and we went our separate ways.

It was when I was exiting the arena that I noticed two Tennessee fans holding up the traditional two fingers, looking for tickets from the Kentucky fans who were coming off the loss and needing to make some cash back. I spoke with Caleb and Blake, who were wearing “Power T” polo shirts, as they waited for Wildcat fans to sell their tickets, but only for a decent price. At the same time as he was holding up two fingers, his buddies were checking StubHub, hoping to see those ticket prices continue to fall.

As of midnight Friday, there were over 4,000 tickets now on the website for sale, starting as low as $30 to sit in the upper deck. There were also great seats in the club level that would’ve cost over $800 on Wednesday morning now going for $116. This is what happened in Tampa last weekend for the SEC Tournament as well, once Tennessee defeated Kentucky in the semifinals.

Here we are again, Kentucky bounced from another tournament and fans getting out of town. Tennessee, Michigan, Saint Peter’s and Murray State are still holding court in Indianapolis, but the folks that own restaurants and bars around this town are now praying that fans clad in Orange and Michigan blue start making the trek to Indy for the second round on Saturday.

Maybe some Kentucky fans will stick around and enjoy some basketball, cheering against the hated Tennessee Vols, hoping to blow off some steam. More than likely they’ll do what Mark from Owensboro is doing and get the heck out of town.

They don’t call it “March Madness” for nothing.