FanDuel will re-launch its cable channel TVG as FanDuel TV in September with Kay Adams as host of a forthcoming morning show.

Adams’ show will air weekdays at 11 am in a lineup to feature content from Pat McAfee’s PMI Network and The Ringer. Note: FanDuel TV won’t carry the “Pat McAfee Show” live. 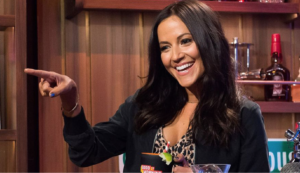 Adams can’t, alone, move ratings. Only a few hosts in sports media have proven to increase the base of linear viewership. It’s a small group that consists of Skip Bayless, Stephen A. Smith, and Colin Cowherd.

However, FanDuel hopes that Adams can be the catalyst for an eventual alternative to existing sports-talk programming.

FS1 proved during its second iteration under then-President Jamie Horowitz that star personalities will move from an established network to start anew if a) the offers are higher, and b), there’s a promising vision.

FanDuel checks off both boxes.

And FanDuel TV will need star personalities. A name to watch is Colin Cowherd. The brand has an existing relationship with Cowherd’s The Volume, a fast-rising digital outfit. If the sportsbook could eventually lure Cowherd to air “The Herd” on FanDuel TV, the network would become an instant factor in studio content.

For now, FanDuel TV won’t attract mass appeal in the form of raw viewers. While sports betting is mainstream, shows that discuss the lines remain niche.

Still, gambling-related content has proven lucrative despite a relatively small following. Here’s why:

One gambling viewer is worth more than one general sports show viewer. A sportsbook can directly monetize each consumer of FanDuel TV or “Barstool Sports Advisors” through sign-ups, promos, or engagement. If they are watching, they are likely using said sportsbook and spending money.

In essence, 50,000 gambling viewers could be as lucrative as 150,000 viewers for one of those debate programs.

So, stick to the lines, Kay. And other soon-to-be FanDuel TV hosts.