Karen Rovell, the man who once told Clay it’s “fun to see how desperate you are now getting for engagement,” is now asking for your help finding a woman he used to swim with when he was three years old.

“I was three. I always loved girls. Never thought they were disgusting. This was my friend Leslie at Woodmont Country Club in Tamarac, Florida. I need help finding her to catch up. Guessing she’s 45 now.”

There are a few things at play here that come to mind immediately:

• Rovell was into older women at 3 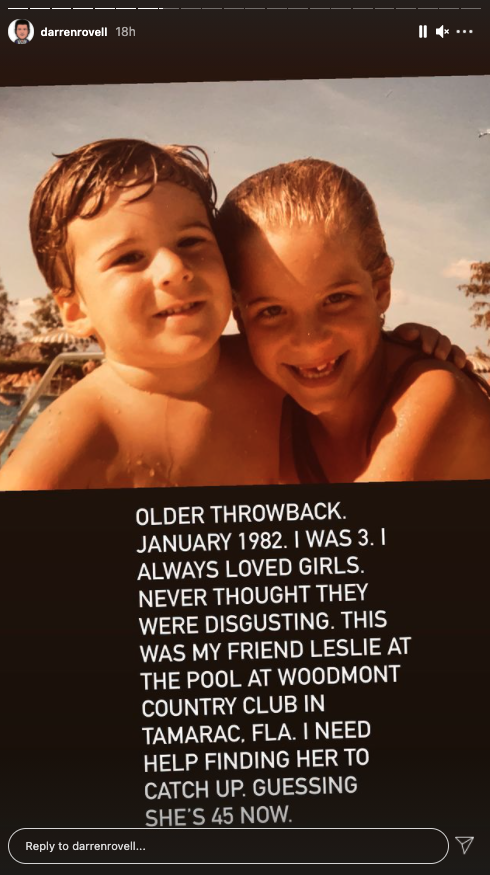 • “Catch up” puts off weird vibes

• Where does this need to “catch up” even come from 39 years later?

• Rovell collects baseball cards, autographs and wants to “catch up” with a girl he swam with almost forty years ago

How does Rovell even have a conversation with a woman 39 years later that he knew from the pool at the country club? What’s there to even talk about? ‘Hey Leslie, remember how you used to sit on the shallow end steps and talk about life?’

Or, ‘Hey Leslie, remember that time I brought a 1981 Topps Greg Luzinski to the pool to trade with Allen Middleton for his Rickey Henderson PSA10 rookie? Hahahahaha…I really ripped him off in that trade.’

Stop and think about this for a minute. THE GUY WAS THREE. HE WAS BARELY DONE TAKING DUMPS IN A DIAPER, and he acts like there’s a reason to launch a search party to locate Leslie.

There have been multiple absurd Rovell moments, but this one just rocketed to a spot in the top five. Rovell has nothing really to go on here. He doesn’t let us know the last time he saw her. Doesn’t have a hometown for Leslie. Doesn’t have her grandparents’ (probably RIP) names.

C’mon Rovell, quit being so desperate for engagement.