Justin Fields has been fantastic this season for Ohio State. Coming into Saturday, the junior quarterback had completed 86.7 percent of his throws while also throwing 11 touchdowns and zero interceptions through three games.

In 2019, Fields only threw two interceptions the entire season.

Let’s just say Saturday has not gone as smoothly for the Heisman Trophy favorite. Fields threw two opening-quarter interceptions against No. 9 Indiana. Fortunately for the Buckeyes, the Hoosiers were unable to convert those turnovers into points.

They did tie the game midway through the second quarter at 7-7, but Ohio State running back Master Teague III took a run 41 yards for a score to retake the lead.

In normal circumstances, Fields tossing those two interceptions wouldn’t be surprising against a top 10 team. But the Buckeyes were three-touchdown favorites coming into the game, so it is a little shocking for someone who has been good at managing turnovers throughout his career.

We will see where things go from here. 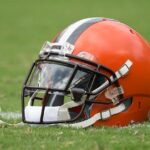 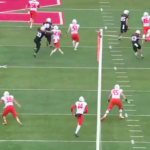