The soon-to-be 30-year-old wide receiver Josh Gordon, who was suspended indefinitely by the NFL in January, seems to be thinking about teaming up with his old party buddy Johnny Football in the new Fan Controlled Football League. In a tweet that has since been deleted, the wide receiver who led the NFL with 1,646 receiving yards in 2013 (his quarterbacks were Jason Campbell and Brandon Weeden) asked his followers if they would watch him team up with Johnny Manziel.

It’s unclear why the tweet was deleted, but at this point what does Josh Gordon have to lose by running some routes for Manziel? Manziel says he is now living by a “win or lose, we booze” attitude as he participates in a league his old buddy Bob Menery has his hands in.

With the NFL seemingly gone from Gordon’s life forever, he might as well keep busy. Stay in shape. Maybe party a little bit with Manziel. Golf. Hit up casinos. Live life.

I’m not up on which wide receivers have caught balls in the FCF, but I have to believe Gordon entering the league would send shockwaves across the cornerback community. 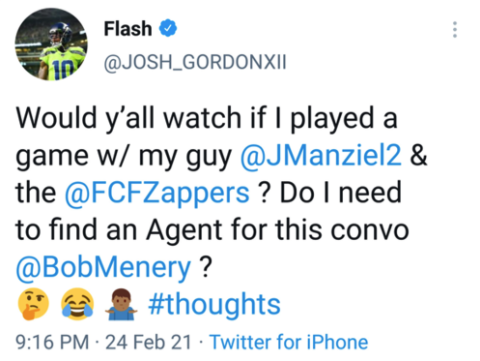 On it. Super agent Menery to the rescue. I fell asleep https://t.co/vy4RAnafCl